Lee Chin proved Wexford's saviour with a monstrous injury-time free to set up a rematch against Kilkenny in the forthcoming Leinster final following an enthralling closing-round provincial group-stage contest at Innovate Wexford Park on Saturday.

But the purple-and-gold remained resolute to force the last-gasp dead-ball from which Chin salvaged a priceless share-of-the-spoils.

A number of flashpoints illuminated a feisty opening to this derby as the sides traded the first four scores - Conor McDonald and Lee Chin sandwiching Kilkenny points from TJ Reid (free) and Conor Fogarty.

However, little separated the neighbours over the first 22 minutes, as Kilkenny tied for the fifth-time on 0-7 apiece with Adrian Mullen, Paddy Deegan, Walter Walsh, Reid (free) and Colin Fennelly negating further Wexford submissions from the inspirational Diarmuid O'Keeffe (2) and Paudie Foley (free). 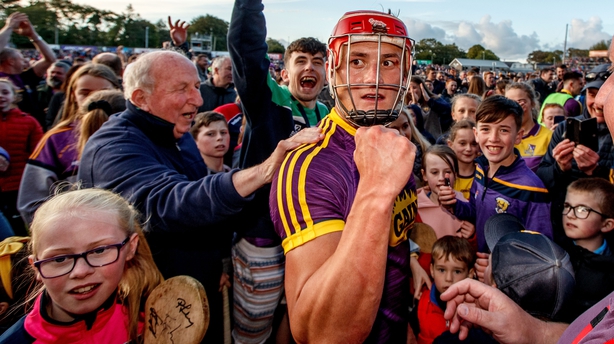 O'Keeffe continued to catch the eye as he nudged Wexford 0-8 to 0-7 ahead moments before the Model County were denied a goal by an heroic goal-line clearance from Huw Lawlor to break Rory O'Connor's heart at the expense of a '65.

Lee Chin pointed that dead-ball and added two more frees, while O'Keeffe and McDonald also helped Wexford stretch ahead by 0-13 to 0-11 at half-time, as three late TJ Reid frees kept the Cats in the fight.

Brian Cody's charges then threatened to steal a march on 44 minutes when Colin Fennelly latched onto a poor Wexford puck-out and fed Adrian Mullen to rattle the net to transform matters by 1-11 to 0-13.

But intrigue was unyielding in this fascinating contest, with the sides tied seven more times, as the O'Connor bothers, Rory and substitute Jack along with Paul Morris all added doubles to match the accuracy of Kilkenny's Paul Murphy, Pádraig Walsh, Adrian Mullen (2), Joey Holden and Colin Fennelly.

Wexford hearts sank when a Chin free crashed back off an upright moments before the purple-and-gold lost Matthew O'Hanlon to a second booking and TJ Reid converted the resultant free to nudge Kilkenny on the brink of victory in the 70th-minute (1-18 to 0-20).

But Wexford refused to yield, and Lee Chin secured a mouth-watering rematch in the upcoming provincial-decider with his monstrous injury-time free from midfield.