This is huge. For whatever reason, Galway are one of the counties that haven't really sparked into life this year. They're not the only ones. We've seen it around the country, the championship is slow enough to get going.

They've an awful lot of good players in that dressing room so what better place to go than Nowlan Park.

I think there will be a better performance from Galway - better than I've seen in quite a while - but I just think Kilkenny at home have been going really well.

They've played a round of club matches down there. They're relentless. Everyone else is calling off matches, they're playing matches and they're getting players back from injury.

I think it'll be a really good game on Sunday but I think Kilkenny will get over the line.

I expect Wexford to win this. They've been very unlucky in their first two matches.

They could have beaten Dublin in Parnell Park but for a late goal from Sean Moran. Their poor free-taking probably cost them a win in Galway. So, they've been in reasonably good form without getting over the line.

I thought Carlow had a chance last week against Dublin but Dublin had a comfortable win there. I think Wexford will have the same on Sunday. 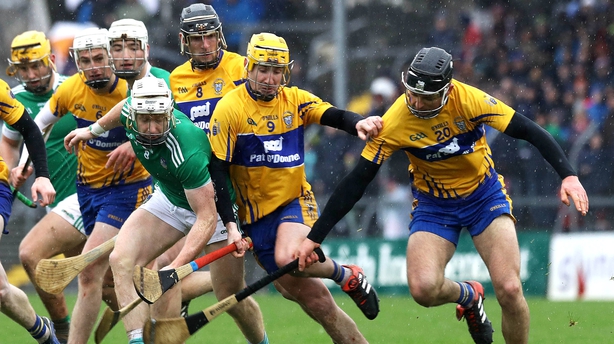 Mathematically, and people may be aware of this, if Cork beat Waterford on Saturday evening and Clare beat Limerick on Sunday, that's Limerick gone out of the championship. (Explainer here)

This has crept up on us really and this is the great thing about this round robin. I know the matches may not have been of the same quality as last year but last year was a little bit freakish in that they were so good so early.

It's 27 years since the All-Ireland champions have exited the championship this early. It's huge for both teams.

The Clare public and local commentary has been very harsh on their team during the week.

Going into a local derby against Limerick, it's going to be much closer. Clare are going to come with a performance.

But I think Limerick's need and their key players - Gearoid Hegarty, Kyle Hayes, Cian Lynch - stood up last week. John Kiely made key changes in the half-back line, dropping Diarmaid Byrnes, and he was backed up by the players on the field.

I think it's going to be the game of the championship and I'm expecting Limerick to come through a titanic battle.

Waterford have been one of the stories of the summer for the wrong reasons. Mathematically, they can still recover but it's hard to see after only scoring 0-10 against Limerick.

There's a lot of soul-searching going on in Waterford, and a lot of comment about their players during the week.

It's been a difficult week for them and I don't think it'll get any easier in going to Cork.

Cork disappointed against Tipp but blew the championship wide open against Limerick. Alan Cadogan coming off the bench really sparked them to life that day.

They've Mark Ellis back at centre back and Eoin Cadogan at full-back and with that forward unit in top form, Cork will have too much firepower, especially given Waterford are scoring so little at the moment.

Follow all the hurling action this weekend via our live blogs on RTÉ.ie/sport and the News Now app, listen to live national commentary on RTÉ Radio 1 and watch live and exclusive TV coverage of Kilkenny v Galway and Limerick v Clare on RTÉ2 and the RTÉ Player this Sunday