Kildare and Longford played out a thrilling 3-15 to 1-21 draw in Tullamore this afternoon with plenty of good football on show.

Longford enjoyed plenty of the ball in the early minutes of the game but it was Kildare who got the scoreboard up and running thanks to a David Hyland point from play.

Midfielder Kevin Feely showed great discipline and strength to turn over the ball in midfield before finding the Hyland for the first score of the game.

Ben McCormack and Adam Tyrell kicked another two points from play in the following minutes before Hyland got his second score of the game to leave Kildare leading 0-4 to 0-0 after ten minutes of play.

Longford responded well with David McGivney kicking three straight forward frees just in front of the posts to bring it back to a one point game before James McGivney levelled the game with a fine score from distance for Longford.

Daniel Mimnagh and Adam Tyrell exchanged quick scores at either end to leave the teams at 0-5 to 0-5 with eighteen minutes on the clock.

Both sides were really going for it in the opening half, matching each other for scores at either end of the pitch with Longford finding huge amounts of space in the Kildare full back line for the opening goal of the game.

Gary Rogers and Daniel Mimnagh linked up well in space before Mimnagh found Darragh Doherty closest to goal to fire past Mark Donnellan and give Longford a three point lead with ten minutes to go in the first half.

A perfect response this time from Kildare picking off three points without reply from McCormack, O’Flaherty and a first point of the game for Brophy to leave the teams level again 1-07 to 0-10.

In the last minute of the first half Kildare found the back of the net through Adam Tyrell. A well worked goal again quite similar to the Longford goal, with Paddy Brophy and David Slattery involved in the build up before Tyrell blasted to the corner of the net to leave Kildare leading by four at half time 1-12 to 1-08.

Adam Tyrell really had his shooting boots on in Tullamore today getting the last 1-1 in the first half and the first score of the second half to extend Kildare’s lead to five points seconds into the second half.

Kildare began to put distance between the teams with a third from David Hyland and another from Adam Tyrell putting seven between the sides.

Longford to their credit could have folded with the deficit getting bigger but responded admirably with points from David McGivney and John Keegan either side of a Mark Hughes goal brought the Longford men back to within one point of Kildare again with fifteen minutes to go.

There was a great exhibition of individual scores on both sides in the closing stages from Barry McKeon and Mark Hughes for Longford and another two from Adam Tyrell ensured Longford remained just one behind as the game entered additional time.

Longford slowly edged themselves forward deep into injury time with the scores still level and it was left to James McGivney to take a crack at goal for the winner but his shot from distance hit the woodwork allowing Kildare to get the ball clear and send the game to extra time.

Three points inside the opening five minutes of extra time for Kildare, a point each for David and Jimmy Hyland and McCormack’s third of the game put Kildare three to the good before James McGivney popped over the score of the game to pull it back to two again.

Jimmy Hyland got his second of the game to leave Kildare leading 1-21 to 2-15 with seconds to go in the first period of extra time but incredibly Longford had the umpire raising the green flag again when captain Michael Quinn found the net after an excellent David McGivney knock down ensuring the teams were level again after the first period of extra time 1-21 to 3-15. 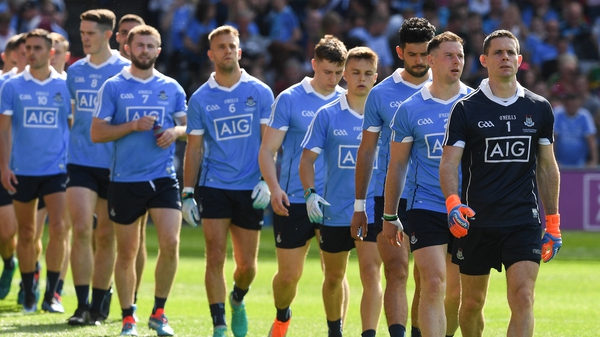 All you need to know: Leinster SFC quarter-finals GAA

Goal-happy Dublin get back to winning ways against Laois