Carlow hurling manager Colm Bonnar has warned that "anything can happen" as his side face into their Leinster championship round robin campaign.

Bonnar's side have enjoyed a hugely successful couple of years, winning promotion to Division 1 of the league in 2018, breaking into the Leinster championship with victory in the inaugural Joe McDonagh Cup last summer, and then maintaining their Division 1 status this spring with a dramatic victory over Offaly in Tullamore in March.

They make their debut in the Leinster league on Sunday, when they travel to Salthill to take on 2017 All-Ireland champions Galway.

"It's going to be a massive occasion for Carlow to get four top-class hurling games," Bonnar told RTÉ Sport.

"It's incredible to think only two and half years ago we were in the Christy Ring Championship. We had so much to do last year to win the Joe McDonagh. Due to our success we find ourselves now at the elite table."

Notwithstanding their hugely impressive league showing, Carlow are widely tipped to return to the Joe McDonagh ranks next year.

They are replacing Offaly in the round robin, Kevin Martin's side having lost all four games last season, shipping 24-point and 17-point beatings in the final two games against Wexford and Dublin respectively.

Bonnar is cognisant of the gap between the top four teams in Leinster and the presumed 'yo-yo' teams but he and his players are determined to narrow that gap.

"Offaly had a tough enough time last year and we are replacing them. There has been a gap between the top teams and the rest and we are trying to close that gap.

"They firmly believe they are capable of getting a performance. If we get enough players on the field, hurling is a strange game and anything can happen. We are not under-estimating the challenge. We are going to places we have never been before.

"The players are going to be asked questions that they have never been asked before. If we can stay standing and hold our heads up high, I'll be a proud manager." 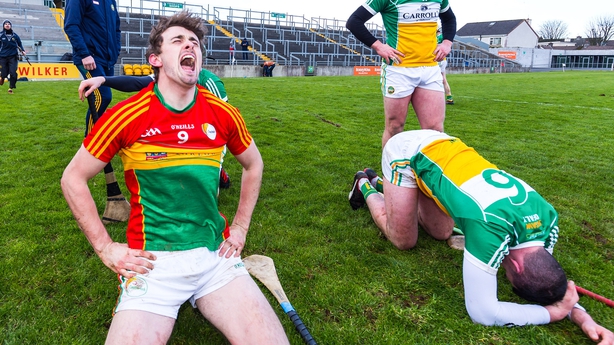 Following Carlow's preservation of their Division 1 status in March, RTÉ hurling analyst Christy O'Connor hailed the county as one of the "success stories" of modern hurling, thriving in spite of their small playing pool.

And Bonnar believes that the progress of the hurling team has captured the attention of the county.

"They are working with four senior hurling teams in Carlow. That is an issue. But they are doing an awful lot of work underage and with the development squads. They are trying to get the number of players up.

"There is huge anticipation in Carlow about this Championship. People have booked their weekend away to Galway and they are all looking forward to it. We'll have a full house when Klkenny come down to Cullen Park which hasn't happened before.

"There is huge expectation. The players will be under pressure but I think we'll take it in our stride and give a good account of ourselves. We'll be true to ourselves, stay a united bunch and who knows?"