Eugene McGee was not your typical Gaelic football manager.

The man who masterminded the downfall of the five-in-a-row-chasing Kerry team in 1982 had never played the game.

That didn’t deter the Offaly board from calling upon McGee to co-ordinate efforts to return the county, who had won All-Irelands in 1971 and 1972, to the top table.

Having enjoyed success in charge of UCD, winning two Dublin senior football championship titles, six Sigerson cups and most notably All-Ireland club titles in 1974 and 1975, he took over in Offaly after the 1976 championship and began to steadily improve them year on year. 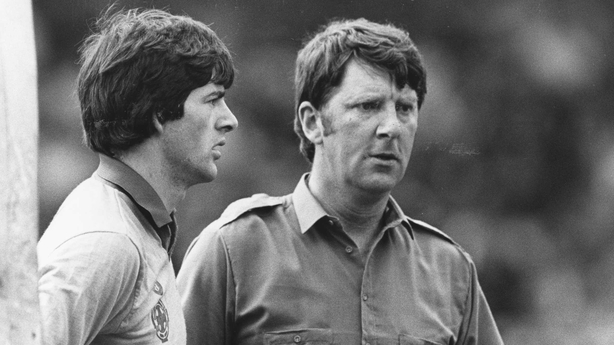 The graph looked like this: Leinster quarter-finalists 1977, semi-finalists ‘78, final ’79, winners in 1980 before losing to Kerry in the All-Ireland semi-final, in 1981 they were beaten in All-Ireland final, by the Kingdom

"It looked like this would be just a coronation," McGee told RTÉ for the Players of the Faithful documentary about the sense of inevitability around Kerry’s five-in-a- row bid.

Generally regarded as one of the best All-Ireland finals in history, Kerry led by four points when Seamus Darby was introduced to the action.

There was some discussion, but no debate, on the sideline about who to send on with just seven minutes left.

McGee, who had the casting vote with the four selectors locked at two votes apiece between Darby and another player, said: "It was lashing rain, All-Ireland final, 60,000 people. Darby had won All-Irelands."

The rest is history.

Members of 1982 Offaly All Ireland winning team have been remembering their late manager Eugene McGee. A man who would do anything for a friend and a brilliant, thorough manager. More on @rtenews and @RTEsport pic.twitter.com/gfBUPToEAQ

A native of Longford, McGee was embraced by the Faithful County and inducted into the Offaly GAA Hall of Fame in 2007.

Ironically Offaly GAA were due to launch a replica shirt from 1982 at the Faithful Fields training centre in Kilcormac this afternoon, and a spokesperson told RTÉ Sport that the event would go ahead at the request of the team members.

When the news broke that the legendary manager had passed away at a family event in the early hours of this morning, tributes soon began to emerge from the world of GAA for a departed legend of the game.

Speaking at the event, 1982 captain Richie Connor said: "He was very helpful to players. He would do everything to make sure that the best team was on the field for the big day. That takes a lot of work in the background.

"We were lucky to have him for those few years."

Goal-hero Darby said: "He was a great motivator and a great tactician.

"He left no stone unturned with his own team and he left very few stones unturned with the opposition because he could read them like a  book and he was a great advantage to us going out on the field."

GAA president John Horan said: "[He was] a straight-talking man of great integrity, Eugene was a hugely respected journalist and author and his passion for the game always shone through.

"The GAA benefitted greatly from this passion through his work on the field, and also through his commitment off it where Eugene was instrumental in helping to aid the [evolution] of Gaelic football."

McGee also managed UCD, Cavan and the Ireland International Rules team but will be best remembered for the 1982 victory, which shocked the football world.

Very sad to hear the news of the passing of Eugene Mcgee,  he'll be an Offaly legend for eternity , his success with the Offaly team in the early 80's inspired me and generations of future Offaly footballers to play the game we love . RIP Eugene . #gaa

Very sad to hear of Eugene McGees death. A man of huge talent. He has a place in Kerry hearts for ever. In a good way!! Beannacht Dé ar a anam uasal. 🙏🏼

Very sad to hear of the sudden passing of Eugene McGee this morning. An adopted Offaly man. Condolences to his family. May he Rest In Peace. 🇨🇮

Sad to hear of the passing overnight of the legendary All-Ireland winning Offaly manager and journalist Eugene McGee.A great story teller and blunt as could be. RIP 🙏🙏

So sad to hear of sudden passing of All-Ireland winning manager and superb GAA analyst Eugene McGee.He was a massive inspiration to all of us who followed in his footsteps Deepest sympathy to his wife and family and all in Offaly and Löngford GAA .

Offaly flag at half mast at Faithful Fields as a mark of respect to Eugene McGee. RIP pic.twitter.com/ggEoMLV12g

A wonderful way to remember #EugeneMcGee - just told this by Tom Parlon.
On the morning of the 82 All Ireland a journalist asked Eugene how badly #Offaly wanted to win. He replied "there's men in that dressing room who haven't had a pint since last Wednesday night! #RIPEugene pic.twitter.com/XH8KddJYdD