Having led by six points entering the final quarter, the Banner would become embroiled in an anxious finish but deservedly prevailed for what proved the perfect tonic to their below-par opening reverse to neighbours Tipperary eight days previously.

In contrast, having got off the mark with a seven point victory over Cork in Nowlan Park, Kilkenny were much more sluggish this time around, with only Kelly's unerring placed balls, 1-11 in total, keeping them in touch throughout.

The visitors did lead by 0-5 to 0-2 by the 12th minute through Kelly (3) and Ger Aylward (2) but the narrative would alter irrevocably only two minutes later when after setting up Clonlara club-mate Ian Galvin for a point, John Conlon broke a Colm Galvin delivery to pull past goalkeeper Eoin Murphy.

It nudged Clare into a lead that they would never relinquish thereafter as additional points from Peter Duggan (2) and Diarmuid Ryan completed a 1-4 unanswered blitz to soar the hosts 1-6 to 0-5 clear by the end of the first quarter. 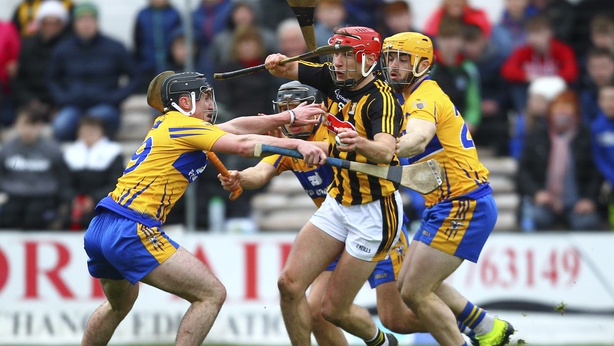 Kilkenny would reduce the arrears to just one by the break at 1-08 to 0-10, thanks in the main to a brace from James Maher. However, Clare upped the ante once more on the restart when a three point burst in as many minutes through Duggan (2) and man-of-the-match Colm Galvin restored a four point cushion.

Kelly's frees ensured that the home side would never be able to sustain any clear daylight until Podge Collins finished off a brilliant back-to-front move despite the best efforts of Murphy to provide a timely 48th minute goal for the Banner.

Further points from Diarmuid Ryan, Ian Galvin and Shane Golden would inspire the hosts to their biggest advantage of the afternoon by the 52nd minute at 2-16 to 0-16.

So even though Kilkenny, predominantly through Kelly's frees, kept up the fightback while goalkeeper Murphy denied Clare substitute Gary Cooney a clinching goal, Clare still had enough of a cushion to survive that late major on their way to a fourth successive League victory over Brian Cody's side.