While progression to the knock out stages did not materialise, there was sense that the Dubs were back on track.

Galway native and former Cuala manager Mattie Kenny was the man picked by the Dublin County Board to keep the momentum ahead of a new league and championship campaign.

Kenny is fully aware of what the challenge is and speaking to RTÉ Sport after Dublin's first-round Walsh Cup win over Carlow on Tuesday evening, he said: "Dublin have been competing near the top level for a number of years now, but they have never been at the top. That's where we want to be.

"Pat Gilroy and his management did good work last year, performances improved. I will be demanding further improvement in the months ahead."

With players from Ballyboden given a break after their run to the Leinster final, and a number of injuries to clear up, Kenny is running the rule over his squad. 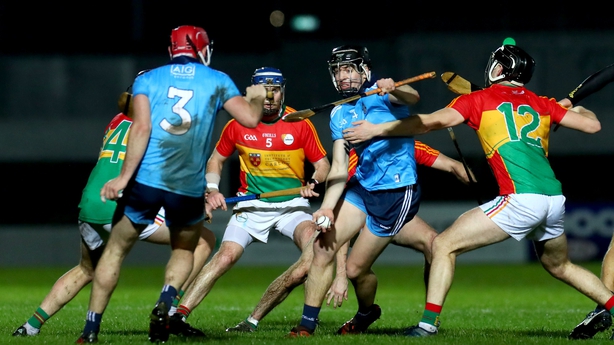 The Walsh Cup affords him an opportunity to do just that.

"Both Carlow and ourselves were delighted to get the game in and got something out of it," he added.

"We've been together for three weeks and it's been mostly gym and conditioning work with the coaches. A few niggling injuries have been there since the club championship and we're trying to get them resolved.

"To see how the lads gelled together as a team, how we defended and our movement up front, was something to take from the Carlow game.

"It was cold, it was wet and it was breezy but the pitch held up well. In fact, t was quite solid. In fairness to both teams they tried to play hurling the right way."