'Tis only the League' goes the old GAA maxim, dismissing the impact that success or defeat in Spring can have on Championship hopes.

That didn't ring true last year when Galway built on the momentum of hammering then All-Ireland champions Tipperary in the decider in April to go on and lift the Liam MacCarthy Cup, but you might have expected the hurling Championship's new round-robin format to reaffirm that bridesmaid's role.

For a number of this year's victorious Limerick team, however, the seeds of their first All-Ireland victory in 45 years were sown before St Patrick's Day, when they beat the Tribesmen on their own turf.

At half-time in the final round of Allianz Hurling League Division 1B games, Galway led by 1-15 to 1-07 and the Shannonsiders looked destined to spend a ninth successive season in the second tier.

A goal from All-Ireland man of the match Kyle Hayes spearheaded an unlikely comeback victory though and for defender Sean Finn it was a season-shaping result.

"A special moment throughout the year was the win in Salthill against Galway," he said. "That was a turning point for us."

"We were eight points down against them that day and people overlooked that, going into that game (the All-Ireland final), that we had already beaten them.

"So we were well aware that we could beat them again."

Even as a spectator, midfielder Darragh O'Donovan knew he was witnessing something special.

"In Pearse Stadium, I was sitting above in the stands, ruled out injured," he recalls. "We were after coming from eight points down.

That the landmark win was achieved without the services of 10 Na Piarsaigh players preparing for that week's All-Ireland club final was all the more remarkable.

"When the Na Piarsaigh boys came back, they really added to it as well," said O'Donovan of the summer that followed and eventual glory.

"You see Shane there coming on (in the final).To have a player like Shane Dowling on the subs bench... probably the best forward in the country."

"William (O'Donoghue), Peter (Casey), Mike (Casey) at the back there. Downsey [Kevin Downes] and (David) Dempsey didn't get on but them boys are pushing every night at training." 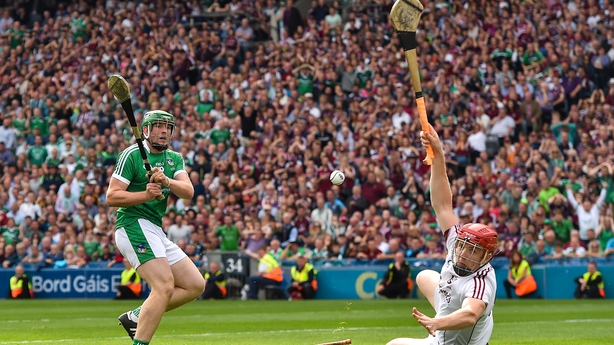 The split-level nature of Division 1 has been much debated but Galway and Limerick have shown in successive years that Championship success can be achieved from 1B - at least when the chance to face 1A opposition in the latter stages of the League remains.

It would certainly be interesting to see what that effect removing quarter-finals would have on the preparations of the second-tier teams.

But today, the resumption of competitive hurling is five months away and Finn and co have a lot of celebrating to do.

"It's special for all Limerick people," he said. "We're waiting a long time and I hope they enjoy every bit of it.

"This hopefully won't be our last one and we'll go at it again next year but we'll enjoy this couple of days."