Limerick survived a valiant comeback from Galway to banish the ghosts of five final defeats and win their first All-Ireland hurling title since 1973.

A game that hadn’t hit the heights of a classic summer of small-ball action exploded into life in the final 10 minutes as the defending champions cut a 68th-minute eight-point deficit to just one in injury time.

But Limerick dug deep to win by the bare minimum in front of a full house at Croke Park.

John Kiely’s side were sharper from the start and led 1-10 to 0-09 at half-time thanks to a goal from Graeme Mulcahy that the Munster pack would have been proud of.

It was the first time Galway had trailed by more than a point at the interval all summer and in truth they were lucky it was that close as Limerick had also hit 11 wides.

Kyle Hayes fired over three points in quick succession as Limerick pushed on to lead 1-15 to 0-10 by the 45th minute.

They raised just two more flags in the remainder of normal time but both were as green as their shirts.

Those goals from Tom Morrissey and substitute Shane Dowling looked to have made the game safe – Limerick led by 3-15 to 0-16 with just two minutes of normal time left -  but the defending champions went down fighting.

Injury-time majors from Conor Whelan and Joe Canning gave the Treaty County an almighty fright before Mulcahy scored what proved to be the decisive point to delight the green-clad hordes.

Limerick captain Declan Hannon with a rousing speech to thank all involved in bringing the All-Ireland back to the county #rtegaa pic.twitter.com/DtiSmio9LX

Galway had looked off the pace from the throw-in as a summer of replays and extra-time perhaps finally caught up with them.

Aaron Gillane missed his first free but atoned with a point from play under pressure and Hayes intercepted Adrian Tuohey to get on the scoreboard.

Limerick were ferocious in the tackle and dominating the puckout but weren’t taking full advantage of their opportunities, and by the time Mulcahy made it a three-point game in the sixth minute they had hit twice as many wides as scores.

Canning kept the Tribesmen in touch from frees in a half where Padraic Mannion, David Burke and Joseph Cooney were their only scorers from play.

Cooney’s first was a superb long-range effort to edge them ahead for the first time in the 16th minute but then Limerick struck for the game’s opening goal.

Mulcahy took a pass from Hayes and showed great persistence to kick and then flick the ball into the net, helped by a kind deflection back into his path off Galway goalkeeper James Skehill.

Declan Hannon led by example with excellent points from distance and Galway were getting little ball in to targetman Johnny Glynn, who was being well-marshalled by Mike Casey when it did arrive.

Cooney cut the gap to two in injury-time but Limerick finished the half with a flourish and scores from Gillane (free) and Seamus Flanagan for a fully deserved four-point lead.

Limerick started the second period as they had ended the first, Hayes landing that superb treble of points for a lead of eight within 10 minutes of the restart.

The sight of Joseph Cooney – Galway’s brightest spark of resistance alongside Canning – looking around frantically as a cross-field pass slipped out of his vision and harmlessly out over the sideline seemed to epitomise his team’s day.

Canning (alongside Cooney and Whelan one of only three  starting Galway forwards to score from play) sparked a mini-revival with a free and a point but when Tom Morrissey robbed Gearoid McInerney of possession and batted the ball to the net the result looked all but decided.

Galway, or more accurately Canning, chipped away at the lead gamely as Limerick failed to score again until the 66th minute.

That was when Shane Dowling gathered fellow sub Peter Casey’s mishit pass to sweep the ball home past replacement goalkeeper Fearghal Flannery, Skehill having been injured in the act of a brave save from Flanagan.

Surely now it was safe to celebrate? Wrong.

There were gasps from the capacity crowd when eight minutes of stoppage time were announced, and Limerick stomachs began to somersault when Whelan promptly rippled the net to make his first real impact on the game.

Just a five-point lead now and still over five minutes to play. When Nickie Quaid stopped Joseph Cooney’s goal-bound effort with his hand, Galway had a 20m-free that they had to go for.

Canning stepped up and lashed it into the roof of the net. Two points between them. Two minutes left.

Niall Burke cut the gap to one. All the momentum was with Galway now and stunned Limerick fans were having flashbacks of 1994 but Mulcahy popped up with his second point to give them a crucial cushion.

Canning converted a 65 but a long free with the last puck of the game fell short and Tom Condon cleared it gleefully.

The long wait is finally over. Liam is heading back to Limerick. 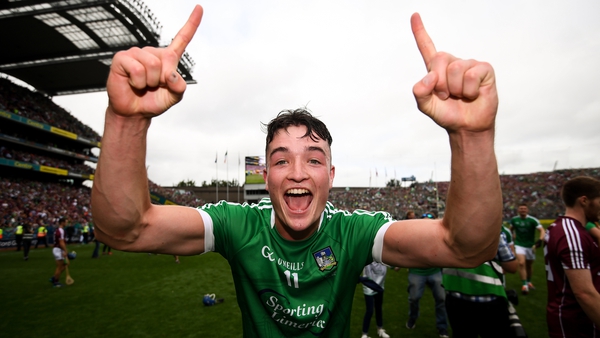