High stakes in this Ulster derby

Donegal have to win if they are to book a last-four date a week on Sunday. A draw will be enough for the Red Hand to reach a consecutive semi-final.

Recent games in Ballybofey between these sides have had no shortage of tension, with much hostility also in the air. Donegal have not lost a match at the venue since 2010 and will be out to break Tyrone's recent run of wins in the 2016 Ulster final and last year's semi-final. Will the sidelines be brought in at MaCumhaill Park? 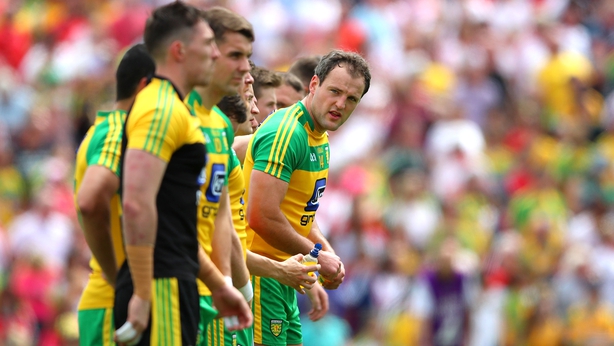 Donegal perhaps showed too much respect to Dublin three weeks ago, but were commanding for the most part against Roscommon the last day in a game where Michael Murphy really excelled. Getting to a semi-final would be a significant statement in Declan Bonner's first year back as manager.

The loss of Paddy McBrearty and now Eoghan Bán Gallagher after he picked up an elbow injury against the Rossies is huge. With that pair on the field, Donegal would be the closest pursuers to Dublin in the pecking order.

As always what to do with Michael Murphy will be key? Where does Bonner play him? In the main the big man is best to start on the full-forward line but he will drift out. Will Tyrone deploy Ronan McNamee (he is fit to start) to keep tabs on the big Glenswilly man or will he go with Padraig Hampsey - a player who curtailed Murphy's influence in the '17 Ulster decider?

Tyrone's season nearly came asunder against Meath in the qualifiers, but out from that they've done a lot a things right this summer. They have been free-scoring and gave the Dubs a few anxious moments in Omagh on 21 July.

Like, their opponents they would welcome a crack off either Galway or Monaghan in the semis.

Tyrone's running game is quite effective and Seán Cavanagh has some doubts whether Donegal have the capacity to go man for man in coping with that surge.

"Leo McLoone and Eamonn Doherty will be guys entrusted to stop those runs. Donegal had some big hitters - Eamon McGee - Neil Gallagher - when we played up there in the past. I think this current team is somewhat different. They now have evolved into a young, light, mobile running team lead by Michael Murphy.

"It will be interesting to see whether they want to engage in a physical approach and I think Tyrone will fancy their chances if it comes down to a physical war."

That said, the three-time All-Ireland winner feels home advantage is a big plus in Donegal's favour, with Michael Murphy's "unerring ability to kick points in Ballybofey from both left or right" in Ballybofey key.

Did you know
Sean MacCumhaill Park’s usual capacity is 17,520 but, due to this Sunday’s all-ticket status, the number of reduced to 15,768.

This will be the 23rd championship meeting between Donegal and Tyrone, with Tyrone leading 12-9 from their previous 22 clashes.

Tomás Ó Sé's verdict
"Match of the weekend for me, and that’s from a Kerryman. The reason why the Super 8s trump the quarter-final system of old in my opinion is after an intense battle against Dublin in Omagh, Tyrone have to play a winner-takes-all battle in Ballybofey against Donegal.

"I think Eoghan Bán Gallagher and Patrick McBrearty are huge losses for Donegal.

"I think this will be a very defensive encounter, very cagey, and the kick-outs and midfield are going to be vital. Both teams will be keen to force the long kick-out so midfield could swing victory. It was interesting that Peter Harte, Niall Sludden, Mattie Donnelly, these fellahs, they were kept very quiet by the Dubs and they’re the leaders of the Tyrone team.

"Despite that, Tyrone impressed me against the Dubs with their running game, their battling qualities and they won’t kick it. I will very hesitantly go for Tyrone."

Team news
Mickey Harte makes no changes from the side that started against Dublin.

Weather
Mostly dry with the best sunshine and highest temperatures occurring over Leinster and Munster; the west and northwest will tend to be cloudier through the day. Highs of 19 to 25 degrees, warmest across south Leinster. For more go to met.ie.