Theere was good news and bad news for Mayo manager Stephen Rochford after the results of MRI scans on two of his most important players.

Mayo captain Cillian O’Connor is expected to have recovered from a torn hamstring in time to face Galway in the Connacht championship on Sunday, May 13.

However, four-time All Star Lee Keegan is almost certain to miss the provincial quarter-final after dislocating his shoulder last Sunday.

Keegan, the 2016 Footballer of the Year, sustained the injury during the first half of Mayo’s defeat to Tyrone in the Allianz Football League last weekend after a heavy challenge from Padraig McNulty.

The Tyrone midfielder was shown a red card by referee, Maurice Deegan, for the tackle.

The Westport defender underwent an MRI scan earlier this week that revealed the full extent of the damage, and he is not expected to have completed his rehab programme in time for Mayo’s first championship match in less than eight weeks.

On a more positive note for the Westerners, Cillian O’Connor is expected to be available for selection for the May showdown with Galway at MacHale Park, Castlebar.

O’Connor, who needs just four points to become Mayo’s all-time leading scorer, tore his hamstring after less than ten minutes last Sunday, but he is expected to have recovered in time for the 13 May clash. 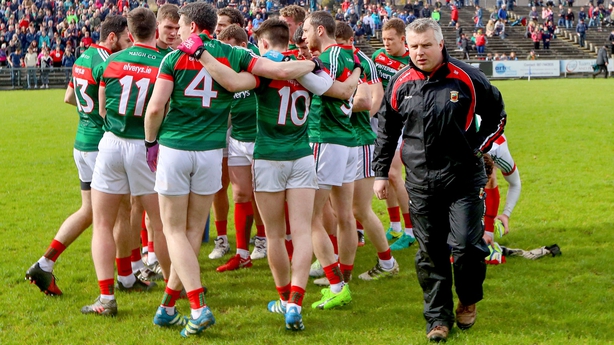 However, Mayo manager Stephen Rochford will have to plan without both players for next Sunday’s Division 1 relegation battle against Donegal in Ballybofey.

But All Star Chris Barrett, who hasn’t played for Mayo since last year’s All-Ireland Final, may be involved against Donegal after lining out for his club, Belmullet, last weekend.

Meanwhile, Footballer of Year Andy Moran is not expected to face any further disciplinary action after being shown a black card during Mayo’s loss to Tyrone.

Moran was dismissed for remonstrating with referee, Maurice Deegan, after a decision had gone against him.