Ulster champions Tyrone produced a brilliant performance to secure their top-flight Allianz Football League status for next year as they overpowered Mayo in Castlebar.

Second-half goals from Lee Brennan and Conall McCann put the gloss on an assured display from Mickey Harte’s men, who were winning at MacHale Park for the third time in a row in front of more than 10,000 spectators.

The result leaves Mayo needing to take something from their trip to Donegal next Sunday if they are going to extend their 20-year unbroken stay in Division 1 into 2019.

But the Westerners suffered a total systems failure here as they crashed to their fourth defeat in six games against the rampant Red Hands.

They were also unable to cope with the loss of four of their most instrumental players in the opening half.

Mayo captain Cillian O’Connor hobbled off after less than five minutes with a hamstring injury while Lee Keegan was also helped off the field in the 35th minute after picking up a shoulder injury after being hit by Tyrone’s Padraig McNulty.

The Dungannon midfielder was duly shown a straight red card by Maurice Deegan for the challenge.

Mayo had been reduced to 14 men on 31 minutes when Colm Boyle was sent off after being booked twice.

Footballer of the Year Andy Moran was also shown a black card soon after for remonstrating with referee Maurice Deegan as Mayo’s plans started to unravel badly. 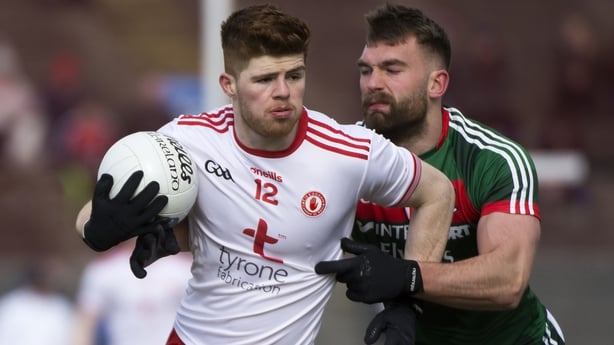 Tyrone also had a few issues to deal with during that disjointed first half with Hugh Pat McGeary stretchered off after suffering a leg injury and Colm Cavanagh was also shown a black card for pulling down Kevin McLoughlin.

When the dust finally settled, after more than 12 minutes of stoppage time had been played, Tyrone led by 0-08 to 0-03 at the interval.

Tom Parsons had opened Mayo’s account in the second minute, but it took them 41 minutes to register a second score, with substitute Conor Loftus tagging on two frees to narrow the deficit.

Tyrone had started as they meant to go on and were leading by 0-08 to 0-01 after 30 minutes as Mayo struggled to keep up.

Mattie Donnelly kicked three inspirational points from play for the visitors to get them up and running, with Lee Brennan (two frees), Niall Sludden, Conor McAliskey (free) and Frank Burns also on target.

The second half turned out to be little more than a formality for the Red Hands as Lee Brennan’s goal four minutes after the restart broke Mayo’s resistance once and for all.

Conall McCann came off the bench to lash in a second goal in the 68th minute to put the seal on a comfortable win as Mayo emptied their bench in an effort to close the gap.

But their miserable day was compounded when Conor Loftus (who finished the game with five points, two from play) blazed a penalty wide in stoppage-time.