Cora Staunton will make a decision on her inter-county future in March as she prepares for the challenge of a lifetime Down Under.

The brilliant Mayo footballer, has four All-Irelands and 10 All Stars to her name, wrapped up a move to Sydney Giants in the fledgling AFLW yesterday and will move to Australia in December.

The women's Aussie Rules league is entering its second year and the Giants snapped up Staunton to add experience and quality to their ranks.

Mayo were beaten by Dublin in this year's All-Ireland ladies football decider at Croke Park, and their 34-year-old taliswoman said she'd take time to make a call on her inter-county future.

"I’ll move out once the club championship is over. I’m aiming to be out in the first week of December. It’s a seven-game series, if you get to the final it’s eight games.

"When the season is over here in March, God knows where it will take me."

"The first round starts at the end of January; it’s a run until the end of March. Once that’s over I’ll be home again.

"I’ve no decision made on retirement. I’m going to give hopefully the next six or seven weeks to the club (Carnachon) and try and do my best there, then come out and start life out here.

"It’ll buy me an extra couple of months before coming to a decision. I’ll see how the body is come March. I’m not ruling anything in or out at the moment.

"When the season is over here in March, God knows where it will take me. I'll see how I am. I won't be making any decision until the end of March or April when I come home."

Staunton has had a whirlwind couple of days, travelling to Sydney to link up with her new coaches and going through a sharp training session to hit the ground running.

She revealed the move has been 12 months in the making.

"It all started last year when I was out at the Asian Gaelic Games as an ambassador. I met (ex-Cavan footballer) Nicholas Walsh, who was working with the Sydney Giants in Asia.

"He told me the women were setting up a professional league. This year I got a message from him asking would I be interested in it and that the coaches wanted to talk to me. That happened maybe in July.

"When Mayo finished after the All-Ireland final we were straight into club action. I was trying to get a week to come out where I didn’t have a match or a club match. I’m flying home on Saturday because we’re back in club championship the following week.

"It’s been a very busy 48 hours. I was out with the club yesterday, going through formalities and doing a skill session with coach Alan McConnell and Nicholas, who’s the coach of the men’s team. It’s probably been known for the last couple of weeks what was happening but I’d to come over and do the formalities.

"I left Ireland on Sunday evening. I arrived over here, Australian time, Tuesday morning. I went straight to the club in Sydney, spent the day there until about 5pm yesterday evening then flew to Melbourne this morning."

Coach Alan McConnell tells us more about @duckie15, the first Gaelic footballer to be drafted by an @aflwomens team. #NeverSurrender pic.twitter.com/Q5rGRjRjJz

Staunton is an accomplished soccer and rugby player and that adaptability will be put to the test when she picks up the oval ball for competitive action.

"It's obviously a huge change, with the ball. That's probably the biggest change, the kicking and the tackling in the game. I've played a but of rugby in the past so the tackling won't be that hard.

"I'm going to have full days where I'm going to be able to train and do all this. You'd hope by the time the games come around I'll be up to scratch. I will be playing as a forward over here, so that will be my main role.

"It is going to be a huge challenge but there's no pressure on me from the club. The main reason they brought me over is to help develop the team.

"It's only their second year with the league, it's in its infancy. To be a a professional sportswoman for a couple of months is going to be huge. I didn't think at my age I'd get this opportunity. I'm going to grab it with both hands and try and perform to the best of my ability." 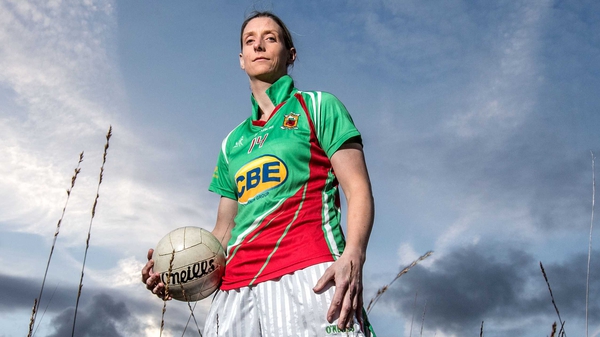