Throw in Burke's inspirational catch, plus Darragh Fives' foul on Burke, which both led to easy Joe Canning frees, and that total reaches six.

Micheal Donoghue got the maximum from his bench against Waterford.

The Galway manager rolled the dice by replacing Flynn with Johnny Glynn in the starting team and, while the New York-based powerhouse laid on a few assists in the first half, it was Flynn to blew the game open in the closing stages.

On The Sunday Game, former Tipperary goalkeeper Brendan Cummins broke down the genius of Donoghue's selection, saying it was very much a case of horses for courses.

"Jonathan Glynn offered a stand and fight approach but Niall Burke brought pace and legs, so when he got out in front of Darragh Fives, he's a strong man, so Fives had no choice but to foul him," said Cummins.

Then we had Jason Flynn, his very first touch of the game, the ball drops into a crowded area and you want a guy who will get onto it quickly and strike it very fast. Jason Flynn is the man for that.

"When it came in here he was on to it quickly and the young man could swing a hurley in a phone box. He is very quick and very economical. 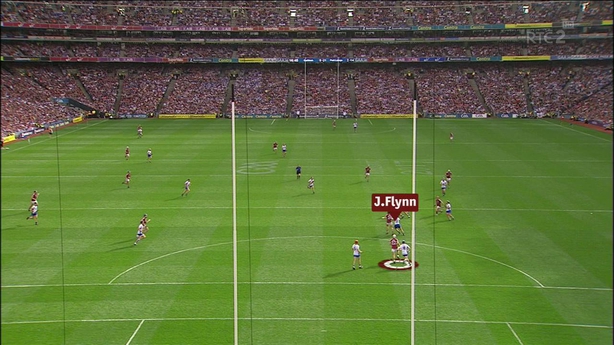 "That was in the dying minutes of the game and when you need the job finished you need your bench coming in to do it. They were a key part of them getting across the line," added Cummins.

That begs the question: should the pair have started?

"With Jonathan Glynn they were pounding down the Waterford defence and when Waterford got a bit tired they couldn't cover off the angles and when Tadhg De Burca had to push up it opened up again another bit."