Kerry’s Donnchadh Walsh is facing a race against time to be fit for Saturday’s All-Ireland semi-final replay with Mayo at Croke Park.

The hard-running wing-forward missed Sunday’s draw due to a hamstring injury picked up in training last Tuesday and the Kingdom missed his tireless work-rate, incisive movement and clever use of the ball.

Manager Eamonn Fitzmaurice admitted that Walsh is a major doubt for the rematch following on from the 2-14 apiece draw with Mayo.

"It was a hamstring injury," he explained. "He tweaked his hamstring on Tuesday night. It is nothing too major but he is probably up against the clock to be back." 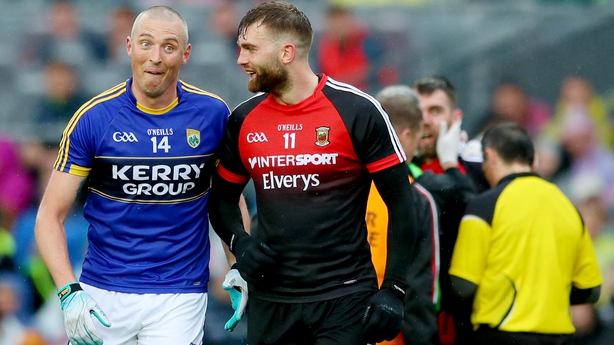 Mayo were the team that had to come from behind, substitute Paddy Durcan firing over the equaliser deep into stoppage time, but in many ways Kerry would be the more relieved team to come away with the draw.

They were opened up for goal chances repeatedly, conceding two, they were fortunate not to give away a penalty in the first half when Mark Griffin appeared to handle the ball on the ground inside the small square and they found themselves three points down early in either half.

"Any time you draw a game you can look at it and say ‘yeah, we got away with a bit there’ but we were a point up with two minutes to go so we could have stolen it as well. But on the balance of play, yeah," admitted Fitzmaurice.

"I think both teams will have regrets; that they could have possibly have won the game, and at the same time be relieved that they’re not going to be out of the Championship as well. It was typical draw, really."

Mayo came into his game tried and tested - it was their eighth outing of the summer. In contrast Kerry had only played three Championship games and none of them against a team that featured in Division 1 of the League this season.

Fitzmaurice is hoping that this heavyweight encounter with Mayo will bring his team along and help move them towards their goal of winning Sam Maguire in September.

"Ah, massively," he said. "I couldn’t put a percentage on it but a game like that is invaluable because, regardless of what you try to do in training, which we do as intense as we possibly can, you can’t replicate that kind of do-or-die stuff so it will benefit both teams for next weekend.

"This was frantic, just a battle, and I think that happens at this stage of the Championship because the prize is huge and even looking at the hurling semi-finals, particularly Galway and Tipperary, it was similar to this game.

"Fellas were putting everything on the line because getting to play in an All-Ireland semi-final is such a huge prize."