Galway captain David Burke insists that the inspirational Joe Canning will "definitely" return for the All-Ireland semi-final clash with Tipperary next month.

The three-time All Star scored 10 points from dead balls as the Tribesmen coasted to a 0-29 to 1-17 Leinster Final victory over Wexford and will now face the reigning champions for a place in the All-Ireland decider.

The gifted forward was substituted during the win over the Yellowbellies with a knee injury, but his team-mate and skipper Burke has no fears surrounding his fitness ahead of the mouth-watering clash with the Premier County.

"He was told three weeks initially after the Leinster Final. He’s put that time in and no better man than Joe to do the recovery and get himself right," he told RTÉ Sport's Brian Carthy, confirming that he has been resting since the provincial success.

"He’s a massive player for us and we’re going to need him playing well the next day if we are to get over the line.

"He’s in good fettle and another two weeks of training will stand to him before Tipperary."

Asked whether he felt Canning will be 100pc fit to start against Michael Ryan’s men, Burke was emphatic in his response.

"Definitely. He will be back in the team."

Now in his 10th campaign with Galway, Canning has made the centre forward position his own as the Tribesmen seek a first Liam MacCarthy title since 1988.

Last year Canning missed his first championship club game through injury since making his senior debut as a 15-year-old and Burke’s club St Thomas’ benefitted from Canning’s absence in their recent club championship encounter, a 1-21 to 1-14 win for the 2016 county champions.

"It was an awful situation to be in, but he just couldn’t play because of the knee," he said.

"He’s the spirit of the team in a sense and the essence of what we’re all about."

Now fully on the road to recovery, Burke is expecting the 28-year-old to be primed for their next challenge.

"I play alongside him and I know him fairly well. I live with him too. He’s the spirit of the team in a sense and the essence of what we’re all about.

"The skill and attitude he has to the game. Everyone in the team has that as well. He’s a massive team player.

"He’ll be relishing the task against Tipperary."

"Often the media throw it out there that were a one-man team, but no better lad than Joe to say that when he plays, he tries to make other players play as well as he does.

"That’s the kind of man he is. He’ll be relishing the task against Tipperary." 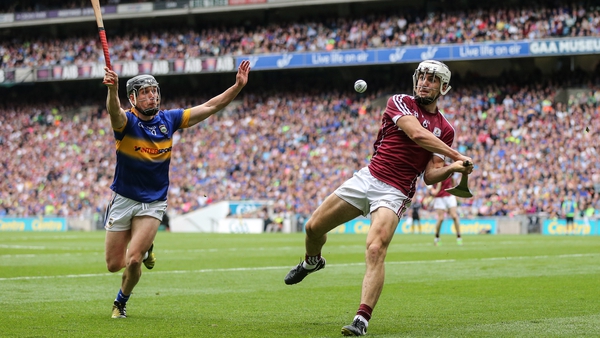