Waterford never trailed as they saw off Wexford’s challenge to book their place in the All-Ireland semi-final with a 1-23 to 1-19 win at Pairc Ui Chaoimh.

A crowd of 31,753 saw Waterford advance, having led by five points at the interval and never allowing Wexford to get back into contention in the second-half.

But the Déise will be without experienced defender Tadhg de Burca for their final-four clash after he picked up a red card for an off-the-ball incident in the closing stages.

De Burca was sent off on the advice of a linesman for tugging on the faceguard of Harry Kehoe after the Wexford sub tried to stop a run from the Clashmore/Kinsalebeg clubman.

Waterford struck a huge blow just before the break when they punished sloppy defending to find the net and lead by 1-12 to 0-10 at the interval.

Eoin Moore’s backpass was intercepted by Shane Bennett, who flicked it on for Kevin Moran to finish to the net with a neat ground pull.

Waterford did most of the running in the opening half but Wexford, who didn’t help their cause by giving away scorable frees, kept in touch.

The sides twice exchanged points in the opening four minutes before Waterford pulled away with scores from Moran, Michael ‘Brick’ Walsh and another free from Pauric Mahony.

Conor McDonald and Jack Guiney responded for Wexford before Waterford again hit three without reply with Jake Dillon getting off the mark and Mahony hitting two more frees to lead by double scores, 0-08 to 0-04, after 18 minutes.

Wexford kept a lot of players behind the ball and, after Guiney and Darragh Fives swapped points, Davy Fitzgerald’s men enjoyable a purple patch - Lee Chin, Paul Morris and Diarmuid O’Keeffe landing good points to leave it 0-09 to 0-08 ten minutes before the break.

Waterford pulled away with another free from Mahony and points from play by Conor Gleeson and Austin Gleeson, but Aidan Nolan and Guiney hit back for Wexford.

But then came the goal from Moran that goalkeeper Mark Fanning, who had earlier saved well from Jamie Barron, was powerless to stop and that left Waterford leading by 1-12 to 0-10 at the interval.

Waterford and Wexford trading great scores in Pairc Ui Chaoimh - watch all the highlights tonight on @TheSundayGame at 9:30pm on @RTE2 pic.twitter.com/WIkWnDAW7K

Derek McGrath's side shot three wides in the opening five minutes of the second-half and Wexford closed the gap to two with points from Liam Ryan and 18-year old Rory O’Connor, a Leaving Cert student who was one of four pre-match changes by manager Davy Fitzgerald.

But Waterford regained control and responded to each of the Wexford points. By the end, nine players had found the target for Derek McGrath’s men.

Both Maurice Shanahan and Brian O’Halloran hit two points apiece after being introduced while Jack O’Connor, Rory’s older brother, scored 1-2 after coming on for Wexford.

However, his goal was a consolation in the final minute of stoppage time after a free from Jack Guiney was blocked.

Wexford continued with their sweeper system almost to the end and Waterford were well able to deal with it, breaking regularly to pick off scores.

Captain Moran added a point to finish with 1-3 with as they eased their way to the last four and took another step closer to an All-Ireland title which has eluded them since 1959.

Waterford will find out who they play, either Cork or Galway, in the semi-final when the draw is made on Monday's Morning Ireland on RTÉ Radio 1 at 835am. Tipperary are the other team still in it following their win over Clare on Saturday. 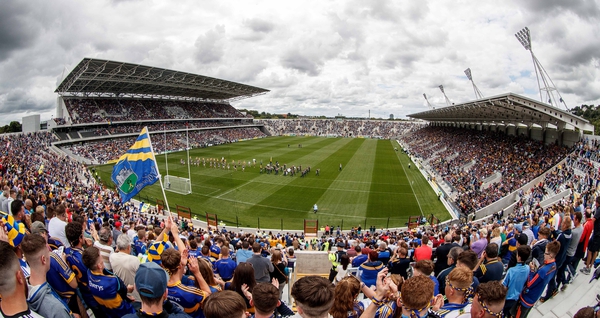