With Kerry favoured by most retain their Munster SFC crown against Cork on Sunday next, former Kingdom star Tomás Ó Sé therefore feels that the Rebels have nothing to lose as they look to improve on their two previous outings in the province.

It's been a mixed bag so far this year for Cork. They failed to gain promotion from Division 2 in the spring, while their championship opener saw them just scrape past Waterford. In the semi-final against Tipperary they started slowly but showed great resolve when it mattered most - Luke Connolly's goal at the death saw them book their place in the Fitzgerald Stadium decider.

Ó Sé, speaking on RTÉ Radio's Morning Ireland, wasn't overly impressed with Kerry's win over Clare in their semi-final - a performance that poses a crucial question for him ahead of the final.

"A few weeks ago I would have been a lot more confident about a Kerry victory than I am right now," he said.

"Cork were going horribly, remember they only kicked one score in the first half against Tipperary. But they sparked to life in the second half. That poses a question for me. Why not have a go? They have nothing to lose. It wasn't as if Kerry were rampant against Clare. They were open at the back after many of their forays up the field."

Despite such reservations, Ó Sé is siding with Éamonn Fitzmaurice's men to land a fifth consecutive provincial title and added: "Cork will look to Kerrigan, Connolly, Maguire and Crowley for leadership but they'll need them and more if they are to win.

"The bottom line is that Kerry will win because they have better options up front. James O'Donoghue and Paul Geaney are very dangerous forwards.

"Overall I think it will be  a lot closer than people think but I'm going for Kerry." 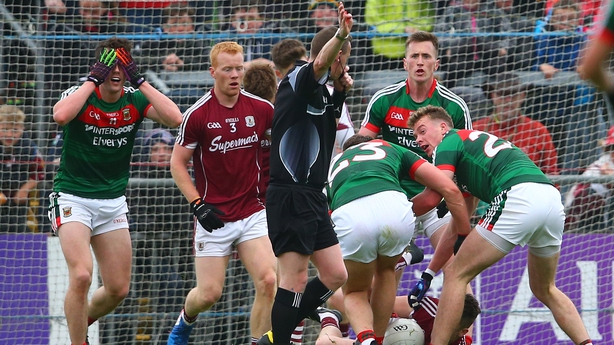 "Mayo have had difficulty with northern opposition this year - beaten by Monaghan and Cavan.

"Keith Higgins is ruled out, Lee Keegan is doubtful and Aidan O'Shea is struggling with a groin.

Appareantlytyhe players called their own private meeting last Saturday week with the blessing of their management. That's a bad sign in my opinion. They looked out of sorts against Galway.

Derry did bounce back after the trouncing by Tyrone to beat a spirited Waterford, but you'd have to go for Mayo."

"Home advantage will be key here. After looking so promising before the game against Tyrone it was surprising that Dublin turned in a flat performance two weeks ago. The younger lads, coupled with some of the senior guys, looked out of sorts.

"Longford took a bad beating away to Laois but came back strongly to beat Louth. You'd have to fancy Donegal though."

"Laois can be very good or very poor as evidence by their displays so far.

"Clare came closer to Kerry than the 1-18 to 1-12 scoreline would suggest. I hesitantly go with Colm Collins' men."

"I tipped Meath to beat Kildare but were absolutely blown out of the water by a stronger, quicker, more direct Kildare.

"The next step up would have been a Kildare scalp, but they didn't get that.

"Meath, however. have enough pace in their forward unit to win."

Follow live updates on the football qualifiers on RTE.ie and the News Now App from 3pm on Saturday with commentary and updates on RTÉ Radio 1's Saturday Sport. Mayo v Derry is live on RTÉ2 .