Michael Murphy says there is "very little fear" among the new crop of young players who have lined out for Donegal in recent months.

The 2012 All-Ireland champions have been going through a transitional period after several senior players opted to hang up their boots.

"It was a case that a lot of the older lads went and the younger lads didn’t have a choice. It was no bother to them, they had very little fear," Murphy told RTÉ Sport. 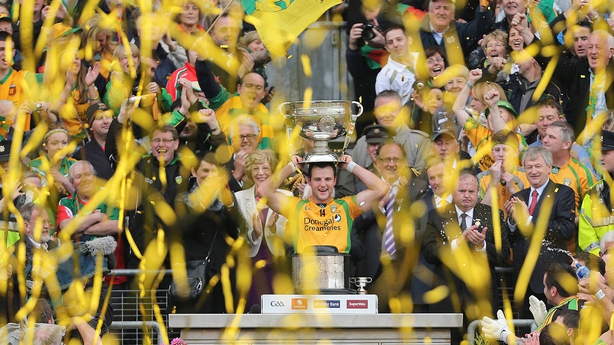 "They can get scores from a wide variety of areas of the pitch. It will be very difficult to pinpoint areas we want to try and negate. We have to look at our own game too and see what we can bring to the table."

"But that was throughout the league, the championship will be a different ball game. We will be hoping that they can put up a good fight and try put in a performance that we can get a result from."

In the Ulster semi-final on Sunday, Donegal will face Tyrone for the fifth time in six seasons. Their most recent encounter was the in last year’s Ulster final when the Red Hands came out on top on a score line of 0-13 to 0-11 points.

"Tyrone are formidable and they can mix the tough defence with the swashbuckling forward style play. In terms of attack they have a hell of a lot of scorers throughout the pitch, coming from midfield and also coming from their shooters up front.

Donegal are bidding to reach the Ulster final for a seventh successive year. And Murphy revealed that Rory Gallagher has been working on ways to improve his team’s performance, especially up front.

"Rory is trying to put something in place so we score a bit more. But with the way the game is going we still need to look on our defence.

"Keeping things out is a major aspect of our game, as well as trying to get forward and get the ball over the bar."

Donegal got their 2017 campaign off to a winning start, beating Antrim 3-19 to 1-9 in the Ulster quarter-final. Although it was a comprehensive victory for the Donegal men, Murphy isn’t getting too carried away.

"We fairly parked that quickly, we took a lot of learnings from it. It was the first day out for a lot of the younger lads. It was great for them to get that win under their belts.

"Tyrone are formidable and they can mix the tough defence with the swashbuckling forward style play."

"Tyrone will be a different proposition. We are very familiar with each-other, we played each-other more or less every year in the league and championship it’s going to be a huge game for us."

Tyrone played Derry in the Ulster quarter-final, earning a 0-22 to 0-11 win, and Murphy was very impressed with their performance.

"They racked up a massive score and any team that is scoring as freely as that is always going to be a huge danger. Tyrone and Derry have a huge rivalry and playing away from home was never going to be an easy task."

The winners of Sunday’s game will play Down or Monaghan in the Ulster final on July 16.

We'll have live blogs on the weekend's football action from 2pm on Saturday and Sunday on RTÉ.ie and the News Now App. Updates and live commentary on RTÉ Radio 1 with live coverage of Tyrone v Donegal on RTÉ2.