Stephen O’Brien fired a late goal and favourites Kerry advanced to the Munster final with a 1-18 to 1-12 victory over Clare at Cusack Park in Ennis.

The reigning league champions were awesome as they trumped Dublin last time out and they move on to face Cork in the provincial decider.

It was 1-05 to 0-08 at half-time after Kerry had Donnchadh Walsh sent-off and David Tubridy scored a Clare penalty.

But Kerry took control when Jamie Malone hit their cross-bar in the second-half and James O’Donoghue was instrumental throughout.

Kerry midfielder David Moran pulled out late on with a calf injury and they won the toss, but even though Fionn Fitzgerald chose to play with the breeze they fell to a 0-03 to 0-00 deficit early on – Tubridy landed some wonderfully taken efforts of his left boot and Eoin Cleary added a free.

Colm Cooper, Aidan O’Mahony and Marc O’Se had left the Kerry panel since last year but Paul Geaney’s influence at full-forward continues to grow. He was their only All Star last year and scored their first point in the 11th minute before James O’Donoghue reduced the arrears further.

Clare reached the All-Ireland quarter-finals last year and shipped a heavy defeat to Kerry at Croke Park, but looked to have learned a few lessons here and they were awarded a penalty when Walsh got yellow after he tripped Keelan Sexton in the area.

Turbridy stepped up and blasted to the top right corner – Jamie Malone quickly tagged on another point and Clare led by 1-04 to 0-02 after 18 minutes. But Clare didn’t score again until the final minute of the first-half, while Kerry kicked six in a row.

Clare opened their Munster championship campaign with a narrow victory over Limerick and that extra game-time should have been crucial, but Kerry found their stride.

O’Donoghue and Paul Geaney combined to whittle down the Clare lead before Kerry had Walsh sent-off in the 34th minute. He collided with Martin McMahon on the ground and received his second yellow card.

Despite that Kerry went in front for the first time in the 37th minute through Paul Geaney only for Ciaran Russell to tie the game up at 0-08 to 1-05 at half-time.

Cleary scored two frees as Clare got into the ascendency at the start of the second-half but there was a massive turning point in the 44th minute.

Tubridy and Sexton were involved as Malone raced through on goal and crashed his shot off the cross-bar. The ball went wide and Kerry went on to make it six unanswered points again.

The game got away from Clare and despite the best efforts of Tubridy Kerry eased their way through with O’Brien sealing the win. 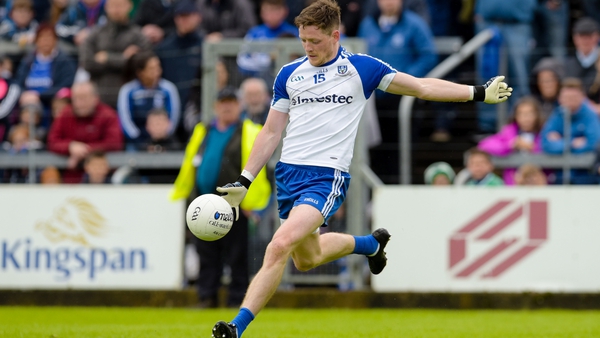