Carlow won their third Christy Ring Cup title in a Croke Park goal-fest, defeating Antrim by 5-23 to 4-15 at Croke Park.

James Doyle fired in a hat-trick of first half Carlow goals, with Eoghan Campbell netting for the Saffrons.

The Leinster men led by 3-12 to 1-7 at half-time, and Martin Kavanagh scored their fourth goal, with Antrim hitting goals through Ciaran Clarke (2) and Neil McManus.

But a fourth Doyle goal and an 11 points haul from free-taker Denis Murphy ensured a comfortable win for the Leinster men, and an All-Ireland qualifier shot at Laois.

Carlow started at a high tempo, with Paul Coady and Denis Murphy firing over points to give them momentum, and they could have had a goal as well, but Martin Kavanagh’s effort was well saved by Chris O’Connell.

Aaron Graffin raided along the left wing to add impetus to a slowly building Antrim offensive effort, and they were on level terms by the 12th minute, with Ciaran Clarke (2) and Neil McManus finding the range. 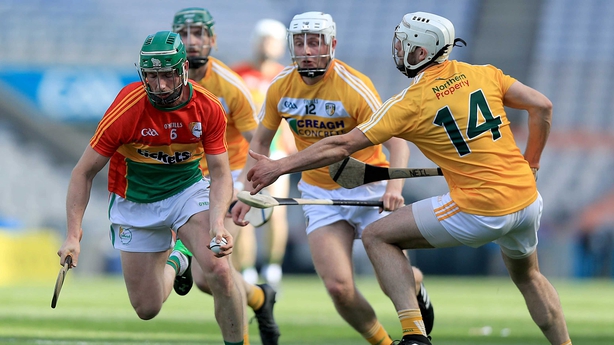 The Ulster men went in front for the first time with a Clarke ’65, but Diarmuid Byrne swept forward to ease Carlow back ahead three minutes later.

The lead continued to change hands, Clarke thumping over a long range free, and they had been level on four occasions by the time Carlow struck for a brilliant goal in the 23rd minute.

Eddie Byrne’s pass was timed just as perfectly as James Doyle’s run, and the wing forward found the space and the angle to rifle his shot to the bottom corer of O’Connell’s net.

And it got even better when Byrne netted again, a carbon copy finish from Martin Kavanagh’s assist.

Antrim responded with a scrambled goal from Conor Johnston within 30 seconds, but Doyle was on fire, and completed his hat-trick on 34 minutes with another splendid finish.

Carlow led by 3-12 to 1-7 at the break, and despite conceding a goal to Clarke three minutes into the second half, they continued to perform with verve and style.

John Michael Nolan slotted over a couple of scores, and Murphy maintained his accuracy and reliability from placed balls.

And in the 47th minute they struck gold again when skipper Martin Kavanagh swerved his way in from the end line to squeeze in goal number four. 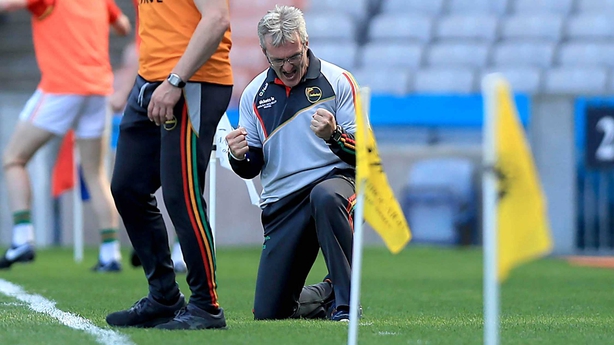 Less than a minute later, Neil McManus drilled a 20 metre free to the net, and he was denied a second goal by a brilliant James Carroll save.

Antrim weren’t finished yet, and Clarke squeezed a shot just inside the butt of a post for their fourth goal in 56 minutes

But Carlow stuck to what they did best, and continued to attack with positivity. Murphy tagged on another handful of frees, and Doyle slipped in behind the cover to bury his fourth goal with four minutes to play. 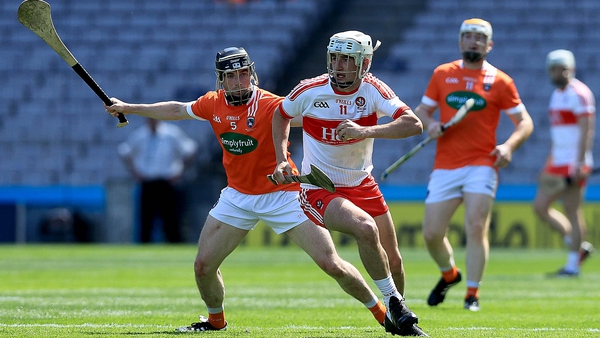