Alan Grant hit 1-4 and Gerald Bradley claimed three points as the Oak Leafers opened out a 1-9 to 0-6 interval lead.

Bradley and Brian Cassidy netted for Derry, either side of an Armagh goal from Ryan Gaffney.

Gaffney grabbed a consolation goal late on, but it was a bitter pill to swallow for Armagh, as they lost a third successive final.

Cian Waldron flicked Gerald Bradley’s delivery into the path of Alan Grant, who rifled his shot to the net in the seventh minute to get Derry off to a flying start.

Armagh responded positively, firing over three points to go level by the 12th minute. Nathan Curry got them off the mark, and Eoin McGuiness sent over a couple of eye-catching scores.

A David Carvill free had the Orchard men ahead for the first time in the 15th minute, but dual star Chrissy McKaigue stepped it up around the middle, and the Oak Leafers slotted three in a row.

Darragh McCloskey and Sean Cassidy stood firm at the back to repel any raids Armagh could muster, and at the other end, they kept the score-board ticking, with Gerald Bradley claiming two spectacular scores.

But for full back Artie McGuinness, the gap would have been greater, and Armagh ended a 15 minute scoreless spell with a David Carvill free.

But the momentum remained with Derry, and two Brian Cassidy scores sent them in with a 1-9 to 0-6 interval lead.

Derry then struck a major blow with two minister of the restart when Bradley smashed home a brilliant goal.

Armagh retorted with scores from David Carvill and Connor Corvan, but soon the Oaks were back in command, veteran Ruairi Convery coming off the bench to stroke over a free, before Cassidy tagged on his third.

Ryan Gaffney lifted Armagh spirits with a goal, booted home in the 55th minute, but his side still trailed by eight.

Brian Cassidy picked his spot for Derry’s third goal, and Chrissy McKaigue fired over a volley of scores, with Brendan Rogers also finding the target with style.

Gaffney grabbed a late consolation goal, but this was Derry’s day, as the added to their 2006 title. 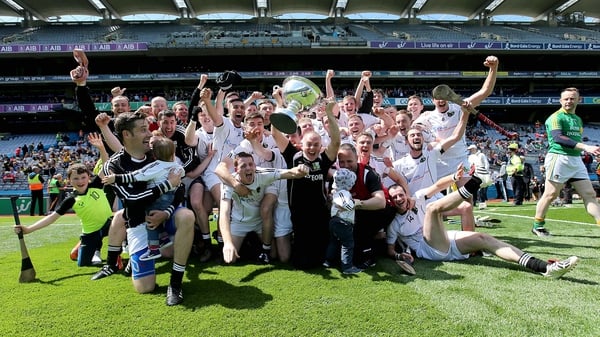