Mayo manager Stephen Rochford admitted he was more satisfied with the result than his players' performance in their Connacht SFC quarter-final win over Sligo on Sunday.

"I'm pleased with the result. There's certainly plenty of scope for improvement in the performance," Rochford told RTÉ Sport.

"Sligo are a difficult team. They came with a lot of discipline and doggedness in their play and we found it hard to shake them off.

"It was a mixed performance. The first game back after a seven-week, maybe there's a bit of rustiness and looking to get out of the blocks but it doesn't just click.

"We had one or two opportunities in the first half that we didn't convert.

"The second half probably petered a little bit. We were good value for the seven or eight-point win but we have a lot to do over the next three weeks."

Although Diarmuid O'Connor rattled the net twice, Rochford believes that the Green and Red will have to be a lot more clinical when they come up against reigning Galway in Pearse Stadium

"We created six goal chances today and only converted two," he said.

"We're certainly creating the chances. We're moving in the right way but it's an area we look to continue to improve on.

"We'll continue to work on those because we know we're going to need to go up another couple of gears for Galway in three weeks.

"They're Connacht champions and division 2 champions so there's a lot of work to do." 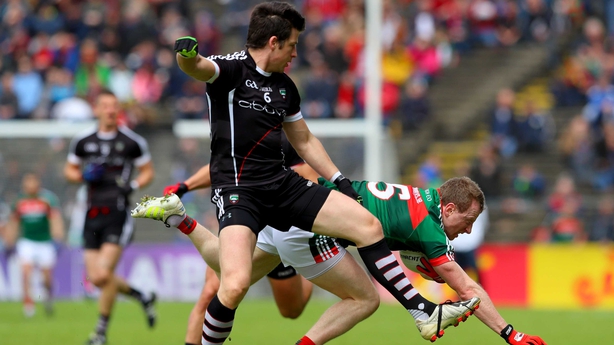 "I thought we performed well," he said. "We played within ourselves in the first 20 minutes, we were very apprehensive on the ball.

"When you're playing a team like Mayo and we're operating out of Division 3, that was always going to happen.

"But in the second half we regrouped. We said 'lads we need to go for this' and in fairness they did.

"We concededed the two goals at the wrong time in each half but other than that I'd be happy with the performance.

"We don't do moral victories but at the same time it gives us something to work on for the qualifiers."

The Kildare native believes an All-Ireland quarter-final place is not beyond the reach of the Yeats County this year.

"Last eight is still very realistic for Sligo and that's our goal this year," he said.

"If we get into the last eight we've achieved something then and hopefully trophies will come after that.

"Our lads have strong belief in themselves and the management team have so in them also.

"Kyle Cawley, Gerard O'Kelly-Lynch and Paddy O'Connor got to an under 21 Connacht final and were playing today so that will bring them on brilliantly in terms of confidence."