Mayo booked a Connacht SFC semi-final clash with Galway as they pulled away in the second-half to oust Sligo by 2-14 to 0-11 at McHale Park, Castlebar.

Diarmuid O’Connor slotted a crucial goal on the stroke of half time as Stephen Rochford’s men led 1-06 to 0-05 at the interval.

Mayo had the wind behind them in the second half but they weren’t overly impressive as Sligo kept within touching distance of their hosts to trail by just three points with eight minutes to go.

But Cillian O’Connor scored 1-02 late on to give Mayo some breathing space as they held on to set up an exciting fixture with Galway on 11 June.

Sligo gave a spirited performance in Castlebar and they got the opening point of the game after just 20 seconds as Stephen Coen split the posts off his left foot.

Mayo captain Cillian O’Connor replied with his first point of the match from a free a minute later before Andy Moran provided the finish to a good team move on four minutes.

Sligo hit back with two points in a matter of seconds. Coen chipped over his second point and from the kick-out, Adrian Marren capitalised on Lee Keegan’s handling error to put the visitors 0-03 to 0-02 ahead with five minutes played.Despite having the wind behind them in the opening half, Sligo’s shooting was wayward.

Niall Carew’s men hit six wides in the first half and after a number of misses, Kevin McLoughlin levelled proceedings for Mayo on 11 minutes.Mark Breheny kicked a free from distance to edge Sligo in front before Paddy Durcan drew Mayo level again with a good score from play.

Cillian O’Connor scored two more frees either side of an Adrian Marren effort as Mayo led 0-06 to 0-05 with four first half minutes remaining.Tom Parsons went close with a goal chance in the 34th minute but it was Diarmuid O’Connor who slotted the crucial score of the half as he blasted the ball to Aidan Devaney’s net a minute later. 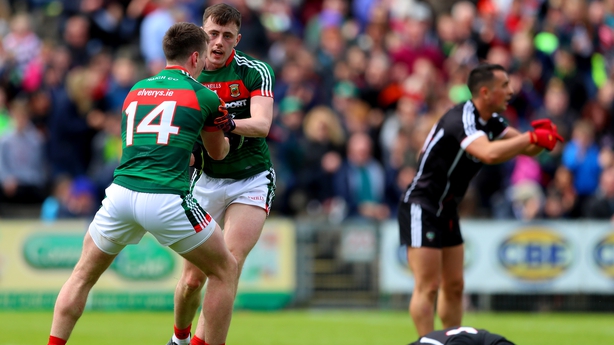 The Ballintubber clubman took a pass from Seamus O’Shea and rode the tackles of two Sligo defenders before finding the net.Sligo goalkeeper Devaney got the opening point of the second half from a free in the 37th minute before Fergal Boland and Moran edged Mayo further ahead.Paddy O’Connor and Breheny (free) replied for Sligo to narrow the gap to just three points on 47 minutes.

Aghamore clubman Boland was beginning to grow into the game and he fisted over his second point of the match in the 52nd minute to end an 11 minute scoring drought for the hosts.Cillian O’Connor kicked his fourth pointed free four minutes later before Marren replied for Sligo as Mayo led by just four points with 10 minutes to go.

Stephen Rochford - much work to be done ahead of Galway test pic.twitter.com/Gzj1qhwLjj

Marren kicked his fourth point for Sligo from a ’45 before Mayo substitutes Danny Kirby and Jason Doherty got on the scoresheet  to round off the victory.