It’s a pivotal weekend in the club football championship with Munster, Connacht and Ulster down for decision, while four sides in Leinster have ambitions of reaching the provincial decider.

The tie of the weekend arguably takes place in Carrick-on-Shannon where Corofin and St Brigid's, two of the most dominant teams in Connacht football, renew rivalries.

On only four occasions in the last decade has the Connacht title not being won by Sunday's opponents, with the Roscommon side getting the better of the Tribesmen in two of those successes (2006 and 2011).

In Munster, Dr Crokes are expected to collect their fourth Munster crown in six seasons, but after upsetting Carbery Rangers in the last round, The Nire will be quietly confident of making a mockery of their long odds.

Five-in-a-row Down champions Kilcoo desperately seek a first provincial success, but standing in their way are 2014 champions Slaughtneil.

The Derry side are seeking a unique double, having already won provincial hurling honours.

It will be a case of David versus Goliath when Mullinalaghta take on the might of St Vincent’s at Glennon Brothers Pearse Park for the right to play in the Leinster final.

The Longford champions have just 31 players to choose from between their senior and junior panels and the Dublin champions will be fancied by many to end their fairytale season and reach a third Leinster final in four years.

On the other side of the draw, Louth champions Seán O’Mahony’s take on a Rhode side looking to finally get over the line in Leinster after suffering four final defeats in the last 10 years.

A clash of the two Connacht giants and a repeat of the finals from 2006 and 2011 where St Brigid’s came out on top on both occasions.

The controversial decider five years ago, where a square-ball decision sparked angry scenes from the Corofin supporters towards the match referee, has been referenced as benchmark, but Gary Sice has said this week that there is “no history anymore” with the change in personnel.

Both sides have won the All-Ireland since that bitter defeat, with Corofin coming out on top last year while the Roscommon side triumphed in 2013..

Only five players that started the 2013 All-Ireland final win over Ballymun Kickhams began the rout of Leitrim's Aughawillan last time out as a new breed of players are giving further credence to the claim that the future is bright in Kiltoom and Cam.

Conor Murray and Brian Stack have cemented their places in a forward line that still has Senan Kilbride and Karol Mannion still leading the charge.

Corofin however will be buoyed after dethroning champions Castlebar in a nerve-jangling semi-final and will have been boosted by the return of former Galway star Michael Lundy after a year in New York.

A titanic battle is expected at Pairc Sean Mac Diarmada.

Since defeating Sunday’s opponents in the 2006 Munster final, Dr Crokes have reigned supreme in the province on three further occasions, though All-Ireland success has continued to elude Colm Cooper and company.

The Ballymacarbry club on the other hand are bidding to become the first Waterford club to win the title, with the memories of the 2014 final defeat still fresh in the mind.

They came a cropper against Kerry opposition that day in Pairc Ui Chaoimh as 12 wides proved costly in a three-point defeat to Austin Stacks.

Resilience is however an area where they won’t be found wanting.

Five-points down to Cork champions Carbery Rangers last time out, they clawed their way back to force extra-time and press home their advantage in the closing stages.

Shane Walsh, Liam Lawlor and the O’Gorman brothers, Thomas and Maurice, bring a wealth of experience, while hurling All-Star Jamie Barron has been an effective force in the half-back line.

The inside forward line of Conor Gleeson, Lawlor and Darren Guiry took the Cork champions for 1-07, but they will face their most formidable opponents to date.

Cooper revealed this week his burning desire to emulate his brothers’ All-Ireland success in 1992 – the club’s sole win in the competition when he was an eight-year-old mascot – and he has been in sparkling form as they move to the business end of the campaign.

He hit 1-03 against Loughmore-Castleiney following on from a seven-point haul in the Kerry County Final, while there is danger lurking all over their forward division.

Captain Johnny Buckley has licence to attack from midfield, while Fionn Fitzgerald and Eoin Brosnan add steel and guile to the rearguard.

Can The Nire learn from past lessons to create history, or will the Kerry champions take another step towards their Holy Grail?

The Down champions, who have now won five county titles on the trot, will finally hope to land their first Ulster title, while their Derry opponents will be looking to land their second in two years.

Kilcoo will be buoyed by hitting the goal trail in the semi-final against Maghery, their haul of 4-13 highlighting the potency of their attack.

Such a haul on Sunday would buck Slaughneil’s trend in 2016.

In their six championship outings to date, they have conceded on average less than nine points a game, marshalled in-chief by Derry senior Chrissy McKaigue.

The Bradleys, Paul and Christopher, will be danger men in attack and the bookies are tipping the Derry men to continue Kilcoo’s wait for provincial honours.

After comfortably claiming their 27th Offaly title, Rhode were forced to weather a late storm from Simonstown to take their place in the last four.

Niall McNamee is the focal point of the attack, while Conor McNamee has contributed important scores from midfield.

Their defence has proven to be a tough nut to crack for all challengers this season as they aim for a fifth Leinster final in the last decade.

Alan Craven’s side looked set to cruise into the last four when Stephen Fisher’s goal seven minutes into the second half gave them a 1-6 to 0-2 lead before Gary White was sent-off six minutes later and eventually survived by the crucial goal.

History is against O’Mahony’s as no Louth side has ever prevailed in Leinster, but they will be firmly focused on the immediate challenge at Drogheda.

If Mullinalaghta were to end St Vincent’s interest in Leinster on Sunday, it would go down as one of the biggest shocks in recent times.

Of the 31 players available Mullinalaghta, only 11 are based in Longford. The odds are firmly against a giant-killing.

Diarmuid Connolly and Tomás Quinn were instrumental in the county final win over Castleknock, while they were never forced to get out of third gear in the win over Palatine, a game that saw Connolly black-carded.

Mayo’s Enda Varley has cemented his place in the team, while former Dublin player Ger Brennan is the lynchpin in defence.

Shane Carty adds a scoring presence at midfield, where he could come face-to-face with David Givney’s whose expertise from placed balls will be crucial if they are to have any chance of progression.

1330 Updates on Sunday's action on www.rte.ie/gaa

Sunday will bring a mix of cloud and sunshine, with daytime temperatures expected to stay very low where the fog sticks at around three or four degrees and getting up to around 7 or 8 Celsius at best further South. Showers are likely to drift up over the country from the Southeast. For more info go to met.ie. 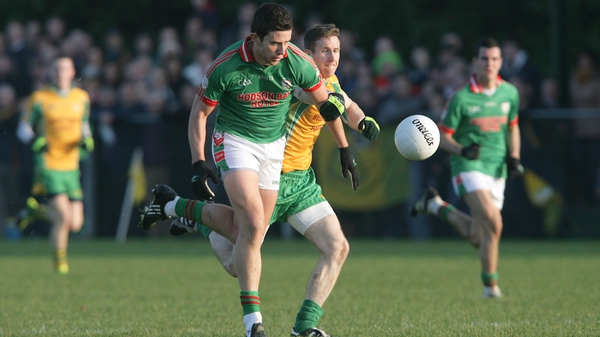 Gary Sice: No bad blood between Corofin and St Brigid's