Davy Fitzgerald paid generous tribute to Galway after acknowledging his Clare side came off second best in their All-Ireland quarter-final battle in Thurles.

Goals from Conor Cooney and Joe Canning were the difference as the Tribesmen ran out 2-17 to 0-17 winners at Semple Stadium, and Fitzgerald lamented the defensive mistakes that allowed Galway find the net.

"We gave up two goals I wouldn't be happy with," Fitzgerald told RTÉ Sport. "They got one straight after half-time to put us 10 down which was a killer.

"You should never be able to walk through the middle like that, that's why you have a sweeper, but we didn't get him back quick enough.

"The first goal was a puck-out down on top of Brendan Bugler and Joe Canning and that's a no-no, that should never have happened."

While Fitzgerald accepted Clare were the architects of their own downfall over the goals, he nonetheless lavished praise on a Galway performance full of intensity and vigour.

"The two (goals) we'll blame ourselves for, but in saying that, the energy and enthusiasm from Galway was absolutely incredible, the way they tackled and hassled.

"So whatever about ourselves, the passion they showed out there today was first class. From a Clare man, I'd like to say well done to them.

"They were the better team on the day. It's a long time since I've seen Galway so fired up and they deserved the victory."

Great to see Davy Fitzgerald as animated and passionate as ever on the line today! https://t.co/BtiNYiYOau #RTEgaa https://t.co/wfSbw1j7Rv

The result was a disappointing conclusion to a difficult week for Fitzgerald, who had minor heart surgery just days ago.

"It's been a tough week," the 44-year-old said. "I'd like to thank everyone for the massive support. I suppose the most important thing in life is life.

"We're wicked dejected in there but I am so extremely proud of my guys. Their fight is unreal and anybody who gives out about them is talking through their behind.

"It wasn't our best day but we've only lost twice in 16 or 17 games this year and there'll be more in those boys to come.

"From a personal point of view I'd sincerely like to thank them, it's great to be able to be here today." 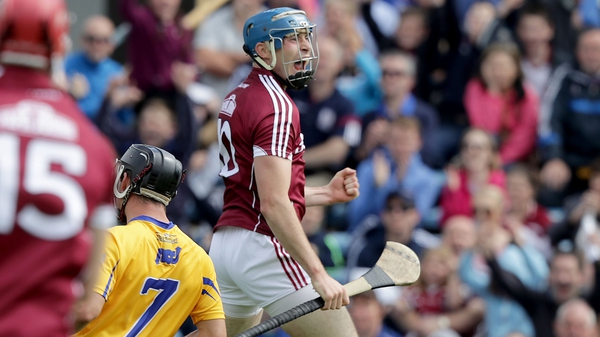