Micheál Donoghue’s Galway marched into the All-Ireland SHC semi-finals thanks to a 2-17 to 0-17 victory over Clare at Semple Stadium this afternoon.

The Tribesmen had goals in either half from Conor Cooney and Joe Canning as they set up a 14 August showdown with Tipperary at Croke Park, in what will be a repeat of last year’s semi-final clash.

Canning collected 1-08 in total as Galway put Clare to the sword in front of 31,690 spectators in Thurles.

Clare boss Davy Fitzgerald was well enough to take his place on the touchline but this was a below-par performance from his charges, who were outgunned by a highly-motivated Galway.

The Tribesmen were obviously keen to atone for their Leinster final defeat to Kilkenny and they did so in style to march on. 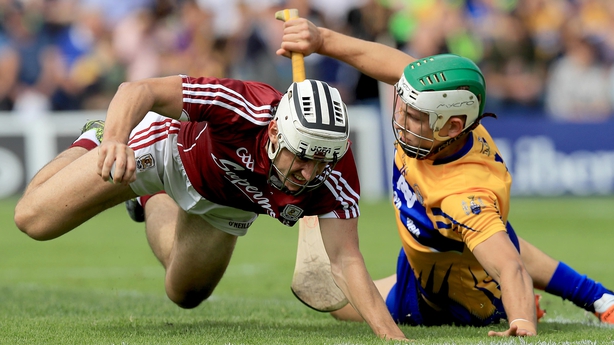 At half-time, wind-assisted Galway had built up a seven-point lead to protect, leading by 1-10 to 0-06.

The goal was a tonic in the 15th minute as Conor Cooney drilled a shot past Andrew Fahy at the Clare goalkeeper’s near post.

That score established a 1-04 to 0-03 lead for Galway and they went on to lead by eight approaching the break before Clare hit the final score of the half from Tony Kelly.

Clare were struggling for inspiration up front and from the 16th minute to the first minute of stoppage time, when Kelly struck, they went without a score from play.

Clare managed just three points from play in the first half, with two coming from the impressive Colm Galvin, as Galway dominated for the most part.

During Clare’s worst spell of the half, Kelly drove a 20-metre free inexplicably wide and the Ballyea wizard was also denied a potential goal by Adrian Tuohy, who made up the ground to execute a brilliant hook.

Canning netted for Galway after 11 seconds after the restart and the Westerners had a ten-point lead to protect.

Clare rallied to reduce arrears to 0-13 to 2-12 but Cyril Donnellan’s point, awarded by HawkEye, steadied Galway nerves in the 58th minute.

Clare trailed by 0-15 to 2-13 with ten minutes left when Colin Ryan slotted over a free but Galway held firm at the back to repel their opponents.

Colm Callanan’s 42nd-minute save to deny Aaron Shanagher was one of many highlights from a Galway perspective as Fitzgerald suffered his first quarter-final defeat to today’s opponents, following victories as Waterford boss in 2009 and 2011, and with Clare three years ago.

Galvin finished with five points from play for Clare and Kelly added seven points, including six frees, but despite finishing with 15 wides, Galway still had more than enough in the tank to advance.