Thirteen points from Conor McDonald fired Wexford into Round 3 of the hurling qualifiers and to their first championship win over Cork since 1956.

Daniel Kearney’s goal eight minutes from time looked to have thrown Cork a lifeline after their challenge fell away following a bright start, but two late points each for Lee Chin and Liam Óg McGovern saw Wexford to a memorable victory.

Liam Dunne’s side led by 0-12 to 0-9 at half-time, but Cork were never able to build on that bright start and they exit the championship.

Wexford were good value for their three-point lead at half-time, but it was a lead that didn’t look likely after a bright start from Cork.

In fairness to Wexford, they got off to a decent start too, but in the first 15 minutes Cork hit six good points from play from six different players as they led by 0-6 to 0-5.

Goalkeeper Mark Fanning gave Wexford the lead in the first minute with a long-range free, but three of the next four points came from Cork, through Patrick Horgan, Alan Cadogan and Bill Cooper.

But Wexford went on to keep Cork scoreless for the next 21 minutes, a period of time that saw them hit seven points of their own to take control as they carried a 0-12 to 0-6 lead.

But Cork finished the half with a burst of scores of their own. Conor Lehane hit two, while Horgan’s free meant there was just three in it at the break.

After the restart, Horgan showed his prowess from placed balls and his radar soon cut the gap to two points.

But Wexford responded with two of their own – the first from corner-back Eoin Moore from long range – to open out a four-point lead again.

Horgan was on the mark for Cork once more in the 42nd minute, but two scores in a row from McDonald and Chin soon settled Wexford again.

But Cork came with a strong surge and they hit 1-4 in the space of 13 minutes to take an unlikely lead as Wexford began to hit wides at the other end.

A mistake form Paudie Foley allowed Kearney in for the goal, but crucially Chin responded at the other end with a great point within a few seconds. And that score proved vital as Dunne’s side pulled clear in the end to seal their progression. 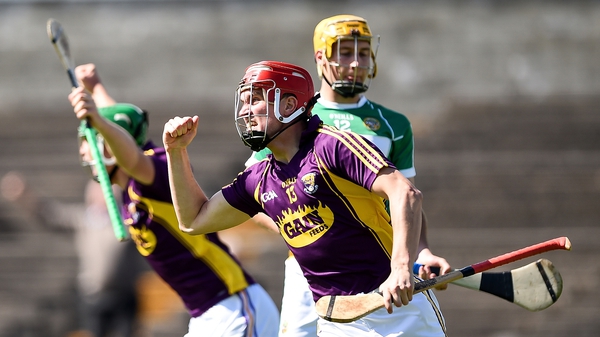