Aaron Shanagher fired a hat-trick of goals for Clare as they ran out 5-33 to 0-12 victors against the 13 men of Laois at Cusack Park.

Shane O’Donnell also struck for a goal in the opening half for Davy Fitzgerald’s side, while Podge Collins hit the net in an impressive second-half, but after the sending off of Ben Conroy for a second yellow card and the loss of Cahir Healy to injury before the break, Laois wilted under the significant pressure of the home side.

Cha Dwyer was also sent off in the closing stages on a second yellow card, reducing the O'Moore County to 13.

Clare now enter the draw on Monday morning for the second round of the hurling qualifiers, but the Banner men will face far tougher tests in the next round.

After a disappointing Leinster championship exit, Laois would have been encouraged to have taken the lead early on when Dwyer landed a free for Seamus Plunkett’s side.

But Tony Kelly levelled for his side with a free of his own and from there on the home side never trailed.

O’Donnell hit the Banner County's first goal in the sixth minute when he followed up on a David Reidy shot that was saved and despite a brief rally from Laois, who hit two quick points, Clare began to pull clear.

With Kelly and Colm Galvin finding their range with ease Clare began to show their class, and when Conroy was shown yellow cards in the 25th and 27th minutes Laois was reduced to 14 men they faced a real uphill test.

Injuries to Leigh Bergin and captain Cahir Healy meant the visitors to Ennis were further hampered in the first-half and after Neil Foyle’s point in the 25th minute, there was no more scores from the O’Moore men before the interval.

Clare cut loose in that period and hit eight points without reply, while Shanagher struck his first goal deep in added-time, which gave his side a 2-14 to 0-5 lead at the break.

There was no pity for Loais after the restart either as Clare showed their ruthless streak. A couple of Podge Collins points got them off to a quick start in the opening two minutes of the half and the scores continued to rain down on Laois. Kelly, Shanagher, Collins and David McInerney all found their range as Clare devoured their helpless prey.

Willie Hyland finally stopped the rot with a free for Laois to bring their tally to 0-6, but that only served to inspire Clare to inflict further pain. Shanagher hit two goals in quick succession as Clare ran into a 4-24 to 0-6 lead, but event that didn’t bring a let-up in intensity.

Substitute Cathal O’Connell took over the free taking duties from Tony Kelly and added five points before the end, while Podge Collins hit Clare’s fifth goal in the closing minutes.

Dwyer saw yellow for the second time as Laois ended the game with 13 men, but the 35-point winning margin didn’t even flatter Clare. 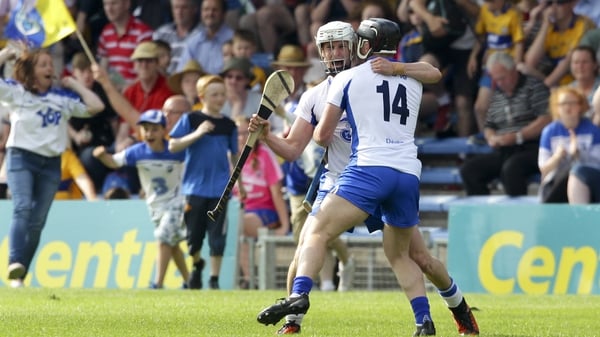