Moran's side bounced back from seeing the Banner men snatch the league trophy from their grasp, registering a 1-21 to 0-17 triumph at Semple Stadium in the Munster semi-final.

And the 29-year-old skipper told RTÉ Radio 1's The Marty Squad that this time Waterford made sure to put Clare away when they had the chance.

"We were disappointed with the two League finals, we didn't get the silverware we wanted, but this was the target for the whole year," he said.

"We're delighted that we turned up on the day and it came out in the right result.

"You'd be conscious of it, when you're leading games and a team like Clare, with serious quality, will come back and punish you if you don't put them away.

"Thankfully we seem to have learned our lesson from a few weeks ago. We did a huge amount of work over the last four weeks and it paid off. Now it's onwards and upwards for the next couple of months."

Maurice Shanahan's early goal settled Waterford and the corner-forward said Sunday's win was the reward for months of hard work on the training field.

"We trained since October/November for this, for the fifth of June and that was always in the back of our heads," the Lismore man said.

"We were disappointed [to lose the league final], but we had to get over that. We regrouped the following day and said this is it now, the fifth of June, and everything goes to that day.

"When you put in the work you like to get the results. It's all about the team in Waterford, that's the one thing we always say, we work together.

"We work like hounds and I think we're doing that, and if we don't we won't win matches.

"Now we're in a Munster final, and we'll enjoy that because we don't get there too often, and hopefully we can get the result in a few weeks' time." 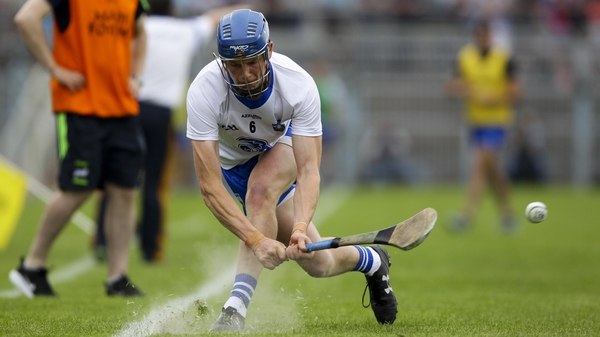