By Daragh Small at O'Moore Park

Donie Kingston was the hero for Laois as they reached the Leinster SFC quarter-final with a 3-16 to 0-18 win over Wicklow at O’Moore Park in Portlaoise.

The win gives them the daunting task of being next in Dublin’s firing-line, as the reigning All-Ireland and Allianz League champions aim for 11 Leinster titles in 12 seasons.

Laois led 1-10 to 0-08 at half-time, the Laois goal courtesy of Gary Walsh, and despite a spirited fight back from Wicklow in the second-half Ruairi O’Connor and Kingston added further goals to finish them off.

Laois have only beaten Dublin twice in 14 attempts in the last 40 years in the championship, and they will find it very difficult in Nowlan Park, even if Dublin are on the road in the Leinster championship for the first time in ten years.

Evan O’Carroll gave the hosts the perfect start with a point after two minutes. And Paul Cahillane added a second point as the hosts were in control.

Paddy Byrne hit back with two points in a row for Wicklow, but the momentum swung back in Laois’ direction and they made it pay with 1-04 in a devastating seven-minute spell.

Walsh began the onslaught with his rocketed goal in the ninth minute when he cut in from the left and finished high into Robert Lambert’s net.

Ross Munnelly showed all of his experience to tag on two further scores before Rory Finn kicked a badly needed point for Wicklow.

Johnny Magee’s men were floundering, and O’Carroll and Donie Kingston made it 1-06 to 0-03 in favour of Laois after 16 minutes.

Laois could have pushed on from here, and gone out of sight but somehow Wicklow found a way back into the game, and Rory Finn was inspirational from midfield.

Laois have six Leinster titles in their history, and were in the 2007 decider, but Wicklow have never won a provincial crown and shown the difference historically between these sides. 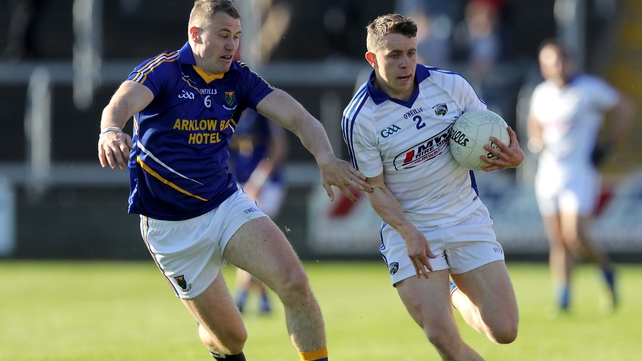 But Laois were favourites against Division 4 opposition in the qualifiers in 2014 and 2015, when Tipperary and Antrim got the better of them and Wicklow were well in this game when Paul McLoughlin, John McGrath and Finn sent over points.

Walsh steadied it for Laois, but Finn hit another.

However Mick Lillis’ side rallied again when it was needed before the break and points from Donie Kingston, Gareth Dillon and John O’Loughlin put them clear, before Dean Healy brought the margin back to 1-10 to 0-08 at half-time.

Wicklow began the second-half brilliantly, Finn gave them an instant boost with a free, and three further points from Paul Cunningham, McGrath and Anthony McLoughlin got them to within one.

An Evan O’Carroll free in the 46th minute was crucial to the Laois cause. O’Connor’s goal followed one minute later and by the time O’Carroll hit his fourth point Laois had moved six points clear.

Three points in a row signalled another revival for Wicklow and Finn’s point from distance, in the 53rd minute, was majestic.

However, Kingston’s late goal was the winner.