A strong performance in the final quarter of the game saw Meath claim a 0-18 to 1-09 win over Laois at O’Moore Park, Portlaoise.

Aided by the breeze, Laois were in superb form early on, aiming for just their second win of the campaign, to add to their away victory over Armagh.

Mick Lillis’ charges were impressive and opened their account with an Evan O’Carroll point after just 18 seconds and moving 1-04 to 0-00 ahead after five minutes.

Indeed Laois maintained their seven-point cushion in the 10th minute, but amazingly went a further 20 minutes without scoring, as Meath fought back.

However, a Michael Newman score ensured the sides were tied at 0-09 to 1-06 at the break.

Meath lost defender Donnacha Tobin through injury at the interval, with Laois leading by 1-09 to 0-10 entering the final stages of the game. However, the hosts lost Evan O’Carroll to a second yellow, with the visitors firmly taking control.

Both teams could have faced the drop, but in the end results elsewhere coupled with a Meath win ensured the Royals remained in Division 2.

This looked unlikely early on, as Laois made a stunning start with an unanswered 1-04, and Meath failing to make an attack inside the first five minutes.

O’Carroll’s early point was followed up with a Niall Donoher score, before the Courtwood clubman bagged the only goal of the contest in the fourth minute, after Donal Kingston’s initial shot was blocked by Meath goalkeeper Conor McHugh.

Conor Meredith and John O’Loughlin followed up with points to ensure a seven-point gap, before Cillian O’Sullivan opened the Meath account with their first point, from their first attack in the seventh minute.

Meath suddenly sprung to life, with Graham Brody forced to come off his line to pull off a save from Michael Newman, before Cillian O’Sullivan kick-started a positive spell from the visitors.

Meath could do little wrong in the middle period of the opening half, with scores flying over from all angles.

Graham Reilly, Newman, Darragh Smith, Andrew Tormey and Conor Downey were on target, as the Royals equalised at 0-08 to 1-05 after 24 minutes.

Reilly had some near misses to put his side ahead, before Kingston broke Meath’s scoring streak with a pointed free in the 30th minute.

Michael Newman levelled the tie approaching 35 minutes, and although Laois dominated the three minutes of injury-time that followed, they were unable to find score, firing two wides during this spell, with another Kingston effort coming off the posts.

Level at 1-06 to 0-09 at half-time, an entertaining second half was in prospect.

The hosts pushed two points clear inside nine minutes of the restart, with Evan O’Carroll and Gary Walsh on target, but O’Carroll saw yellow for a second time, and ultimately red, and this numerical disadvantage proved costly for the hosts.

Newman and substitute Ross Munnelly traded points, but Munnelly’s score was Laois’s final point, as Meath kicked on, over the remaining 17 minutes.

Meath moved 0-15 to 1-09 ahead following a Cian O’Brien score with six minutes remaining, but Laois continued to work hard.

Darren Strong’s goal shot from the resulting kick-out was blocked by McHugh, and from there until the end Meath grew in confidence to take a six-point win. 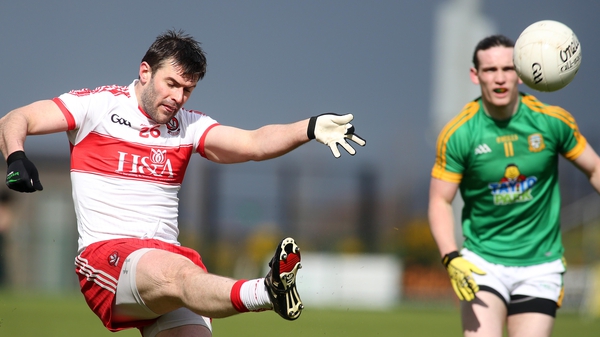