Louth won the NFL Division Four title with a Conor Grimes goal in stoppage time, beating Antrim by 3-12 to 1-14 at Croke Park in a gripping finish to a thrilling decider.

Derek Maguire fired in an early Louth goal, but five Tomas McCann points and a Matthew Fitzpatrick goal had the Ulster men ahead by 1-9 to 1-5 at the break.

Jim McEneaney smashed home a Louth goal, but Tomas McCann levelled with his eighth score, and it was Grimes who bagged the winning goal in stoppage time.

McCann and Brian Neeson nudged the Saffrons in front, but in the fifth minute, Louth full forward Conor Grimes used his strength to fend off a couple of tackles and sent wing back Derek Maguire in to blast the ball to the net.

Antrim crowded the midfield area, but it was the Leinster men who flourished in the hunt for broken ball, and they took the lead for the first time in the  14thminute when Jim McEneaney arrowed over a sideline kick. 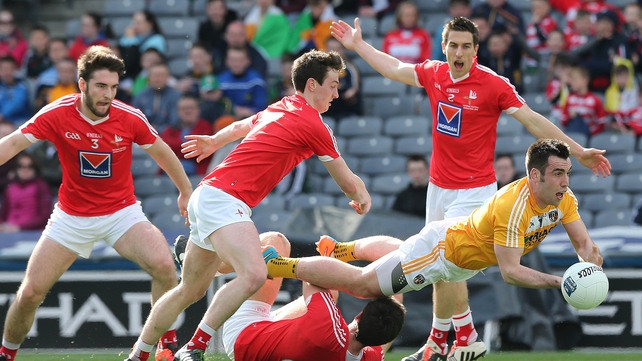 A superb long range effort from the adventurous Maguire stretched the lead, and the Ulster side were now struggling to get decent ball in to front men Neeson and McCann, who had looked dangerous in the opening stages despite their isolation.

They went 13 minutes without a score, before corner back Ricky Johnson slotted a point, and McCann brought the sides level from a 25th free.

It took Colin Kelly’s side just seconds to regain the lead, a tidy sliced effort from Declan Byrne.

Michael McCann took up a more advanced role as Antrim pressed late in the half, and after his younger brother had struck another free, Fitzpatrick collected Kevin Niblock’s pass to drill a low shot to the bottom corner of the net.

Antrim led by 1-9 to 1-5 at the break, and, driven on by the energy of midfielders Niall McKeever and John Carron, stretched the lead through McCann.

But Louth were dangerous on the counter, pulling back scores through James Califf and Byrne, who bundled over his third in a goalmouth scramble. 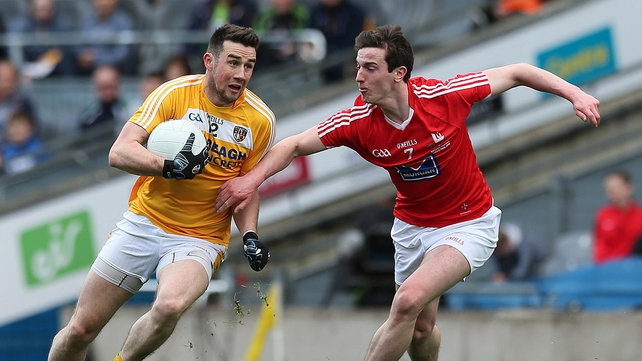 And they almost reaped the rewards from a route one strategy when Tommy Durnin got in to fire in a shot, which was saved at close range by Chris Kerr.

Antrim reverted to a route one strategy, but it was their energy and togetherness that set them apart as they seized control.

McEneaney re-entered the action following treatment for a blood injury to smash home a brilliant goal, and now they were two ahead.

Once again, the Saffrons lost the scoring touch, this time for 23 minutes, but came storming back to go level through Conor Murray.

But it was Louth who conjured the killer score, substitute Ruairi Moore slipping the pass to Grimes, who hit the net from close range, before Maguire sealed it with a late point. 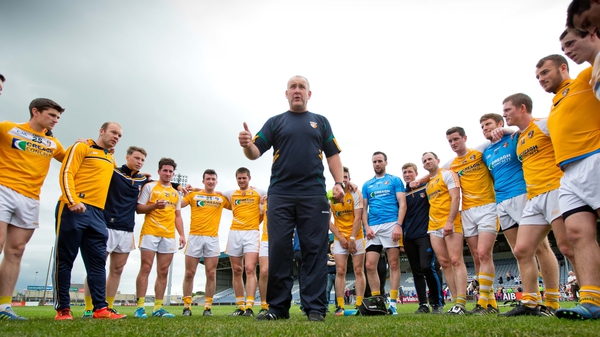