Clare scored a dramatic 2-17 to 1-19 over Kildare to lift the NFL Division Three title at Croke Park.

Neil Flynn hit the net as the Lilywhites went six points clear, but Clare dominated the second quarter, and David Tubridy’s 35th minute goal sent them in with a 1-10 to 1-9 interval lead.

Tubridy and Jamie Malone were on target as Clare took an early lead, but in the seventh minute, Neil Flynn, who had already helped himself to two points, smashed home a Lilywhite goal.

Tubridy and Jamie Malone were on target as Clare took an early lead but in the seventh minute Neil Flynn, who had already helped himself to two points, smashed home a Lilywhite goal.

He cut inside, rounding a defender and goalkeeper Joe Hayes, before finishing to the roof of the net from close range.

In a devastating four-minute spell, the Leinster men hit 1-4 to move into a six-point lead, but there were some anxious moments at the back for a nervous Kildare defence.

And they had midfielder Tommy Moolick to thank for getting back to save off the line from Pearse Lillis, who soon afterwards slotted a neat Banner point.

Kildare pressed high up the field, pinning their opponents deep inside their own half, but retreated at pace to close off the counter-attack, with Eamonn Callaghan and Kevin Feely making the hard yards.

But Gary Brennan and Cathal O’Connor helped turn the midfield possession battle in Clare’s favour and they had points from Tubridy and Keelan Sexton, but a spectacular fetch by Feely sent Eoghan O’Flaherty through for a point as Kildare went 1-7 to 0-7 ahead.

Clare continued to threaten with their pacey counter-attacks and wing back Jamie Malone brought a terrific save from Mark Donnellan, who dived to his right to push the hot onto a post as referee Noel Mooney played a sensible advantage.

Tenacious defending from Jamie Malone and Sean Collins repelled a couple of Lilywhite raids, and on the breakaway, Clare struck for a goal, Tubridy finishing superbly from Sexton’s assist to give his side a 1-10 to 1-9 interval advantage.

Adam Tyrell swung over a couple of scores early in the second half, bringing Kildare level twice, before regaining the lead from a placed ball in the 43rd minute.

Cleary had the sides level again from a 13 metre free which Clare’s incensed players insisted should have been a penalty.

He quickly added another, but Tyrrell’s sweet left boot had the sides level again, and Kildare were beginning to find gaps in a stretched Banner defence, such was the commitment to attack of Colm Collins’s side.

Fergal Conway eased the Lilies into a two points lead, but they suffered a double blow with the loss to injury of ace finisher Tyrrell and the dismissal of Feely, who picked up a second booking in the 57th minute.

And they were denied by the woodwork when Tommy Moolick found space to collect Cathal McNally’s defence-splitting pass, but sent his shot crashing against the crossbar.

Kildare continued to take the fight to the Munster men, stretching them wide and finding the support runners to make it count, with Paul Cribbin hammering over two wonderful long ranges scores for a three points lead.

But there was to be late drama, with Brennan rising high to fetch on the edge of the square, before slipping the ball inside for centre back Dean Ryan to dive and punch to the net and level the game.

Clare had sub Graham Kelly sent off on a straight red card, but survived, and tagged on late points from Enda Coughlan and Cleary to take the title. 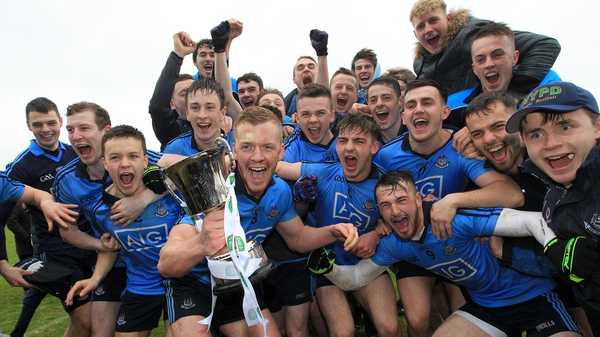