Dessie Farrell's side had to dig deep in Navan having fallen seven points down early on but O'Callaghan's first-half goal hauled them back and he added three points in extra-time.

Cillian O'Shea's goal in the extra period was vital too as Dublin, beaten by Kildare three years ago in the minor championship, secured a famous win and an All-Ireland semi-final clash with the Connacht champions on 16 April.

It was tough on Kildare for whom Neil Flynn impressed with 10 points but, for the second year running, his heroics ended in defeat to Dublin at the provincial final stage.

Dublin were underdogs for the first time in the campaign and, perhaps as as result, looked nervous early on in normal time.

O'Callaghan, their talisman against Meath and Laois with a combined 1-12 tally, missed two scoreable frees, one from the 20-metre line.

Kildare were far more economical at the other end and quickly opened up a three-point lead.

Flynn kicked their opener from a free before two from Ben McCormack, one off either foot.

McCormack added a third before midfielder Paschal Connell boomed one over from long rant to open up a 0-05 to 0-01 lead. 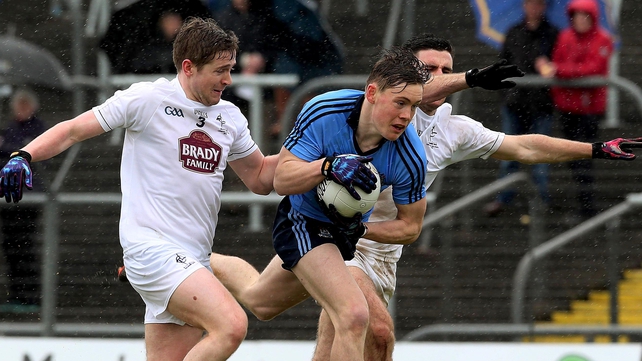 AIB All-Ireland club medallist Colm Basquel and O'Callaghan kicked Dublin's only two scores in the first 27 minutes as Kildare strode into a commanding 0-09 to 0-02 lead.

Kildare oozed class up front but looked porous at the back when Dublin attacked and O'Callaghan blasted a 27th minute goal from close range, turning the tie on its head.

O'Callaghan, Chris Sallier and Glenn O'Reilly tacked on further points to leave Kildare leading by just 0-10 to 1-05 at the break.

Kildare's lead was entirely wiped out early in the second-half when O'Callaghan took his tally to 1-03 for the afternoon with a 32nd minute point.

Dublin took the lead for the first time in the 49th minute through O'Reilly but a tense and exciting contest was unsurprisingly level again after 54 minutes when Flynn converted a Kildare 45, 1-11 to 0-14.

Both sides had opportunities to win it in the dying stages with Lorcan Molloy and Paddy Small going close for Dublin while sub Mark Sherry sliced a late goal chance just wide for Kildare.

The sides were level again early in extra-time but O'Shea's 69th minute goal, after good work by O'Callaghan in the build up, ultimately settled the contest.