Mayo picked up a vital 1-11 to 1-07 win in their battle to avoid Division 1 relegation as Evan Regan’s goal just after half-time ensured Roscommon’s late comeback at Dr Hyde Park was in vain.

At one stage Mayo led by nine points after a flurry of scores after half-time, but after his introduction Diarmuid Murtagh hit 1-1 for Roscommon and inspired an impressive comeback, only for the clock to beat them.

Cillian O’Connor made a surprise comeback from injury for Stephen Rochford’s side and he kicked the insurance free in injury-time.

Mayo would have been annoyed to only lead by two point at half-time, 0-6 to 0-4, after they dominated the majority of play, kicked ten wides and conceded two late points to Ciaran Murtagh in added time before the break.

Mayo were totally dominant for the most part, with Tom Parsons, Seamus O’Shea and Aidan O’Shea forming a strong triangle around the middle of the park.

Any time Mayo lost possession Parsons dropped back in front of his full-back line, and he was able to quench a couple of promising Roscommon attacks with his good positional sense and strong tackling technique.

However in the 38th minute he didn’t give enough protection to Ger Cafferkey and a quick free from Cathal Cregg picked out Ciaran Murtagh who pointed on the turn.

Stephen Rochford must have been tempted to send Cillian O’Connor for an early warm-up as he watched his side miss the target on eight occasions in the first 18 minutes, a time when Mayo were most dominant. 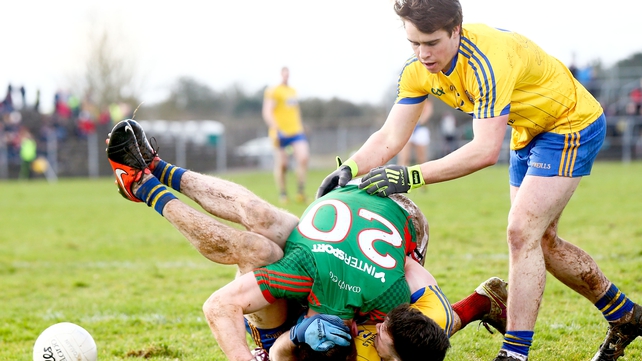 By the 22nd minute it looked as if Mayo might get way with that poor return in front of goal when they led 0-4 to 0-0 thanks to point from Evan Regan and Conor O’Shea, while a Robert Hennelly 45' and Alan Freeman free made up that total.

Roscommon finally impacted the scoreboard in the 23rd minute when Conor Devaney looped around Enda Smith and pointed – it was just their second shot at goal – but Hennelly’s second 45' restored Mayo’s four-point lead soon after.

The Mayo forwards were also kept at bay by some smart goalkeeping from Geoffrey Claffey who denied Diarmuid O’Connor and Lee Keegan with top class saves in the third and 24th minutes.

And at the other end his forwards finally repaid that good work in the last five minutes of the half as three points from Murtagh put two points between the sides at the break.

After that dominance with the wind advantage Mayo had a right to be dismayed with their return, but all thought of their first-half malaise was forgotten as they exploded out of the dressing room for the second-half.

A Freeman free gave them a three-point lead before Regan ended any Roscommon hopes of victory with a brilliant goal in the 38th minute.

He initially did very well to chip up the ball to himself on the run with Sean McDermott in close contact, and while Maurice Deegan erred in failing to pull him back for over-carrying, Regan cut in on his left foot and drilled a low shot past Claffey. 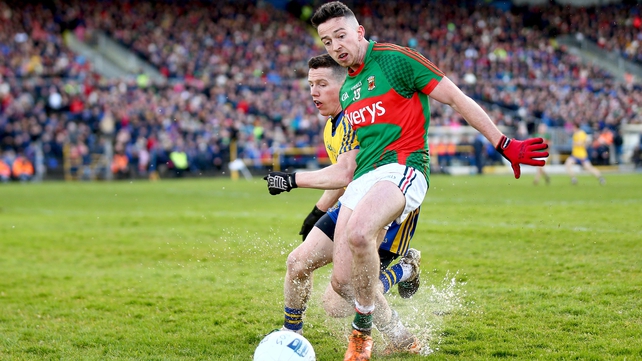 Two minutes later Regan curled over a great free off the ground to make it 1-8 to 0-4, and Paddy Durcan and Regan added further points to make it a nine-point lead.

But somehow when they looked a beaten team Roscommon came with a strong charge in the last 12 minutes.

Fintan Cregg kicked Roscommon’s first point of the half in the 58th minute when David Murray was fouled, but the comeback gained huge momentum three minutes later when Enda Smith’s long delivery was caught on the turn by Diarmuid Murtagh who dispatched a brilliant shot to the bottom corner.

Five points still separated the sides, but further points from Devaney and Diarmuid Murtagh had just three between the sides with two minutes remaining.

But Cillian O’Connor eased Mayo nerves with his injury-time free, which sealed the win for the away side.

A win against Down next week should be enough to see Mayo avoid the drop, while Roscommon may yet need something when they host Dublin next weekend to make the last four. 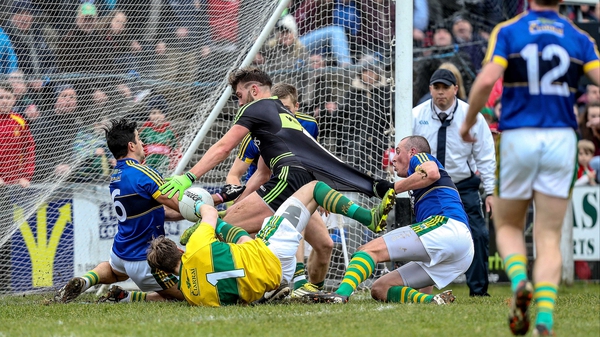 Kerry win to leave Mayo in the relegation mire