Donnchadh Walsh struck a second-half goal for Kerry who made it three wins in a row in Division 1 with a five-point victory over Mayo, as they continue to battle back from their poor start to the season.

They lost their first two outings against Dublin and Roscommon, but this was their first win in six against Mayo in the league. They were 0-07 to 1-03 behind at half-time but they grinded it out and Johnny Buckley’s goal was also pivotal in MacHale Park.

Kieran Donaghy and Diarmuid O’Connor both saw red late on, while Peter Crowley got a black card. But Kerry recorded an impressive win, as Mayo fell deeper into relegation trouble.

Mayo lost their opening three games against Cork, Dublin and Donegal, but the win over Monaghan last weekend was a huge boost. They take on Roscommon and Down in the remaining games. While Kerry clash with Monaghan and Cork.

Kerry had the better start and hit the first two points against the breeze, through Peter Crowley and Darran O’Sullivan. But the Mayo defence began to get on top and crucially the returning Colm Cooper was kept quiet by Ger Cafferkey.

In turn the Mayo attackers found their range and although he missed two gilt-opportunities from frees, Kevin McLoughlin opened their account in the eighth minute.

Bryan Sheehan was also luckless from the placed-ball at the other end, and it took the hero from Mayo’s win over Monaghan, goalkeeper Robbie Hennelly, to slot the first free.

Diarmuid O’Connor and Shane Nally kicked two more points as Mayo began to roam freely in the opposition half. However, Sheehan tapped over a badly needed free for Kerry in the 21st minute.

Aidan O’Shea almost goaled for Mayo shortly before the half-hour. Jason Doherty fed the ball into him just outside rectangle and he wasn’t able to shrug off the attentions of the Kerry defence but he still managed a point. 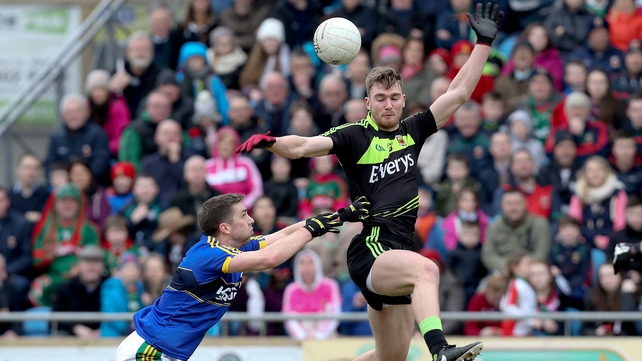 That gave Mayo a 0-05 to 0-03 lead in the 27th minute, and further efforts from Hennelly and McLoughlin gave them a solid four-point advantage. But Kerry struck a vital goal in added-time.

Cooper was involved. He gave the initial pass to O’Sullivan and he pirouetted to leave the Mayo defence for dead and send Buckley in on goal - the Cromane clubman made no mistake with an emphatic finish.

Kerry built on that after the break and they hit four of the first five points in the second-half. O’Sullivan, Buckley, Sheehan and Cooper all contributed as they took a strange-hold on the game, and a 1-07 to 0-08 lead.

Tom Parsons hit back but then Walsh riffled the clinching goal in the 12th minute of the second-half, after a Cooper free fell short.

Mayo were now four in arrears and Cooper piled on the pressure with another free. Donaghy was sent-off for a second yellow when he tangled with Moran but despite McLoughlin’s point Mayo couldn’t get any momentum.

Instead Kerry reassumed the control and although Crowley got black for an off the ball incident with nine minutes left, their bench performed heroics, and Brendan O’Sullivan kicked two fine efforts late on.