Paddy Andrews is confident Dublin have enough quality on the production line to absorb the double blow of losing Rory O'Carroll and Jack McCaffrey for their All-Ireland title defence.

Two-time All Star full-back O'Carroll revealed his plans to move to New Zealand for work reasons at the start of the year, while the news of Footballer of the Year McCaffrey's intentions to head to Africa for volunteer work rocked the Dubs further.

However the outstanding strength in depth Jim Gavin has at his disposal means Andrews fully believes the absence of two key figures will merely open the door for younger players to snatch the summer headlines.

"There’s no point in crying about it at this stage – the guys aren't going to be available. We’ve full confidence that one or two guys are going to step up," Andrews told RTÉ Sport.

“They're both fantastic players - you’d obviously rather have them than not - but they've made their decision and unfortunately won't be available for the summer.

“Bryan Cullen’s new position (as the county's High Performance Manager) would be involved in helping guys from U14 level to find a pathway all the way up to the senior team.

"We’re seeing the fruits of that at the minute. The success of the minor and U21 teams four of five years ago, these are the guys that are now the bedrock of the senior team."

"Because of the system we have in place with our underage teams, we’ve guys that will put their hands up"

Andrews, 27, stressed that the foundation of Dublin's current success has been laid over several years, going back to Pat Gilroy's time at the helm, with their focus on youth and development reaping its rewards.

That focus on implementing a structure and approach to their underage structures means raw talent is stepping up to the plate with greater ease.

“It’s a classic example of two guys that have gone but because of the system we have in place with our underage teams, we’ve guys that will put their hands up and you’ve seen that already this season," Andrews added.

"We’ve full confidence in the guys that are going to come in and get the opportunity.

“That success we had under Pat initially and then Jim, that just builds a confidence in the systems of play we have, just sticking with the process.

"It could be one guy one week, another guy could come in another week but it’s the same process and the same systems we’re playing. Once we keep winning we’re happy enough with that consistency."

Dublin have already qualified for the Allianz League Division 1 football final having won five games from five, but the St Brigid's forward knows that taking their eye off the ball is not an option.

"We’ve Donegal next and Roscommon the last day, who are absolutely flying, it’s great to see. We’re the same as most teams, trying to build towards a summer performance, and that’s what we’re going to use the next two games for." 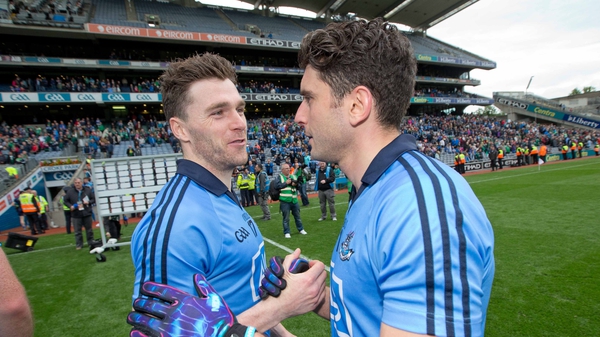