RTÉ analyst Ciarán Whelan believes that a lack of options in the forward division is limiting Mayo's quest to kick on this year.

The former Dublin star was speaking on RTÉ Sport's Allianz League Sunday in the aftermath of Mayo's loss to Kerry in the Allianz Football League - a result that sees the Connacht side now occupying a relegation spot in the top flight.

"Up front is really where they are lacking and that's where people were looking at Mayo in the absence of Cillian O'Connor," said the former Dublin star.

"They are looking to find a forward or two but they are very one-dimensional with Aidan O'Shea up there at the moment. Teams are able to close them down."

On their current placing in Division 1, with two games left, Whelan added: "They are under pressure but they can still avoid relegation. They have Down at home in the last game and you'd expect them to win that. Before that is a huge game away to Roscommon."

Reflecting on the loss to the Kingdom, former Kildare great Dermot Earley said: "Mayo started strongly and were in control in defence. Colm Boyle was playing the sweeper role quite well and was well supported by Lee Keegan. They were dominant in midfield with Tom Parsons and Seamus O'Shea and Kevin McLoughlin was getting the scores up front.

"This game turned on the Johnny Buckley goal. After all their dominance, Mayo went in only a point up at half-time. They dodn't capital;ise on the extra man when Kieran Donaghy got sent off And then there were the 12 wides." 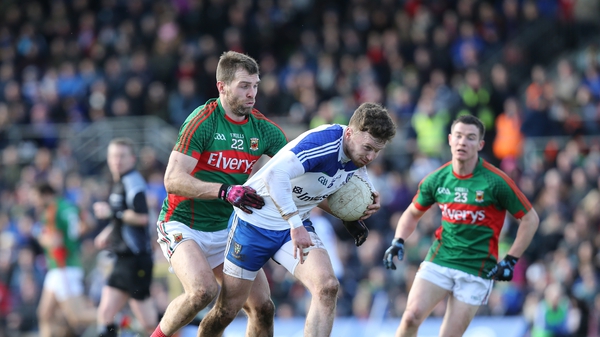