Mayo manager Stephen Rochford felt his side “were good value” for their win over Monaghan – a result that saw the westerners claim their first points in this year’s Allianz Football League Division 1.

Goalkeeper Robbie Hennelly nailed two frees late on to secure the 2-11 to 1-12 victory in what was a hard-fought encounter in Clones.

“The boys dug out a solid win and we’re delighted to get the two points,” was Rochford’s immediate reaction when he spoke afterwards to RTÉ Sport.

Indeed, Mayo had to play most of the game without Aidan O’Shea, who was black carded early on. In those early stages, Rochford felt his side were struggling, but added that scores at crucial times did contribute to their ascendancy as the first half ended.

“I thought we stood off Monaghan in the first quarter of the game. We gave them a bit too much room around the middle third of the field. But then Diarmuid O’Connor got an excellent point and Conor Loftus goaled It allowed us to lead by a point at the break.

"After half time, we got what was a fortuitous goal but you have to hand it to Diarmuid (O’Connor) for his persistence. We were good value for the win."

As the second half wore on, the game became more additional, with the Mayo boss somewhat critical of his side’s discipline.

"There were a lot of frees and even though we were going well we allowed them back in the game by conceding frees which was disappointing," he added.

"That's something we'll have to work on in the coming weeks. Thankfully Robbie dugs us out with two wonderful kicks and he also made a great one-on-one save earlier in the game."

Next up for the Connacht champions is a home date with Kerry and a chance to further ease their relegation worries.

“Kerry have a bounce in their step now after two wins and now have a lot of their star names back,” says Rochford.

“A win for us would leave us on four points. I'd be happy with that at this stage of the season after all the hard work that has been put in." 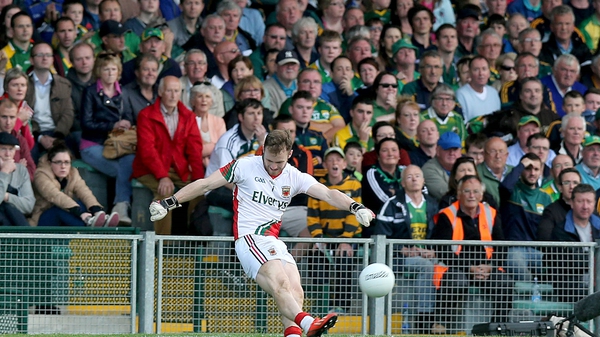