By Paul Keane at Clones

Visiting Mayo arrived at the Monaghan venue rock bottom of the Division 1 table after three defeats and looked as if they may have let victory slip again.

They led by five points early in the second-half only to be clawed back to level terms with just minutes remaining in a pulsating contest.

But Hennelly strode forward to convert long range 66th and 74th minute frees which ultimately sealed the much needed points.

The win was all the more impressive for battling Mayo as key duo Aidan O'Shea and Lee Keegan were dismissed on black card offences in either half.

But it was tough on Monaghan captain Conor McManus who rallied his team superbly in the second-half and finished with 1-08 having similarly booted a dozen points in the defeat to Dublin last weekend.

Mayo came into the contest knowing that anything less than a win would leave them staring relegation in the face.

Their task became a lot more difficult after just nine minutes when talisman full-forward O'Shea was black carded for a petulant challenge.

It was more silly than cynical from O'Shea as the Breaffy powerhouse threw Ryan Wylie to the ground though referee Joe McQuillan still brandished black.

Three minutes later, Monaghan won a penalty which McManus fired to the net, albeit after his initial shot was parried by Hennelly, and suddenly Mayo trailed by 1-02 to 0-02.

The five-in-a-row Connacht champions responded impressively though and had turned a difficult situation into a positive one by half-time when they led 1-06 to 1-05.

Conor Loftus supplied the Mayo goal just two minutes after McManus had netted when he sped in from the left wing and fired a low shot to the Monaghan net.

That strike levelled the scores at 1-02 to 1-02 and in O'Shea's absence, younger brother Conor stepped up with two excellent points from play. 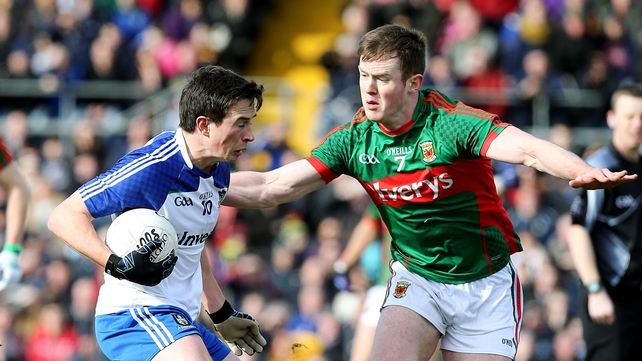 Even Regan kicked two Mayo points from frees and nudged them in front at half-time with a cracking point from the left wing in injury-time.

Diarmuid O'Connor went one better in the 40th minute though it was a more unlikely goal as he somehow poked a loose ball through the goalkeeper's legs to the net.

Mayo led 2-7 to 1-5 now and defended their lead stoutly, making some inspirational blocks at the back to frustrate Monaghan.

Stephen Rochford's side lost another key player to a black card with 20 minutes to go when Keegan was dismissed for a drag down of McManus.

Monaghan tried to make them pay in the closing stages and McManus was excellent from placed balls. His sixth converted free of the second-half drew the sides level at 1-12 to 2-9 with six minutes remaining.

But Hennelly had the final say with those two late frees to seal the badly needed win. 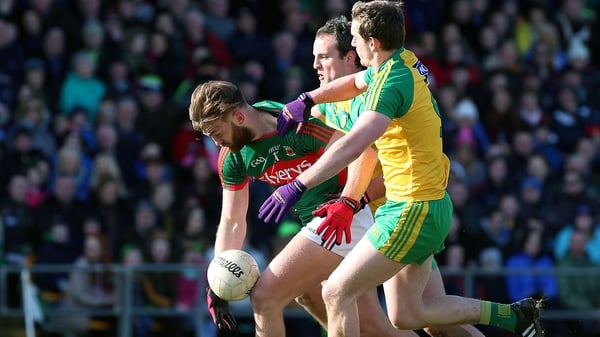