Donegal remain top of the Allianz League Division One after a hard-fought 1-14 to 1-12 win over Mayo in Ballybofey.

The game was evenly matched throughout but turned when Donegal grabbed their goal with about 15 minutes remaining, a superb score from Leo McLoone.

Mayo had probably been edging the game up to that point after taking a three-point lead midway through the second half, thanks to penalty converted by Diarmuid O'Connor and a point from Conor Loftus.

There was some controversy surrounding the penalty as Donegal thought that Regan had carried the ball over the end-line before cutting back.

Donegal then lost Neil Gallagher to a black card, just seconds after his introduction, but they showed remarkable fighting spirit and once they got back in front, thanks to McLoone’s goal, they always looked like closing out the game.

The sides were level on four occasions going tit for tat for much of the opening half.

Mayo led by two points on three occasions in the opening quarter with Regan converting two frees, but Michael Murphy was equally impressive from placed balls at the other end.

In a free-flowing fixture the sides were well matched and Robbie Hennelly landed a long-range free for Mayo, while Murphy replied with a 45 for Donegal.

Mayo had two players yellow carded inside a minute for high challenges, Conor O'Shea and Shane Nally, while Neil McGee also picked up a yellow.

Ryan McHugh scored the point of the half with the outside of his right foot, but on the stroke of half-time corner-back Brendan Harrison came forward to edge Mayo into a narrow half-time lead, 0-08 to 0-07.

The star of the show for was corner-back, Paddy McGrath, who continually kept Donegal on the front foot with Ryan McHugh also driving the Tir Chonaill men forward.

The win means that Donegal have full points from their three games and now head to Kerry next weekend in a very good place. 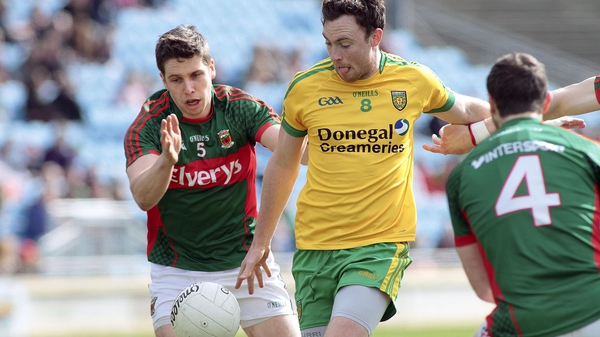