Tyrone saw off Derry by 2-15 to 0-12 to record a fourth straight league win that keeps them bang on course for promotion to the top tier of the Allianz Football League.

And a fourth defeat of neighbours Derry this season means they remain out in front in the psychological battle of minds ahead of the big Ulster Championship meeting in May.

Goals from Sean Cavanagh and Aidan McCrory keep the Red Hands on top of the table following a convincing nine-points success at Healy Park.

This defeat has punched a huge hole in Derry’s promotion hopes, their second in as many matches, and they need to turn the corner soon.

In front of a crowd of 5,665, Richie Donnelly arrowed over four delightful points from play, while Ronan O’Neill was unerring from placed balls, hitting five from five, as well as one from play.

Derry struggled to counteract the Red Hand running game, which was extremely effective, despite the heavy Omagh surface.

All-Ireland Under-21 winning captain Kieran McGeary marked his league debut with a point after  just 22 seconds, but Derry were ahead by 0-03 to 0-02 by the tenth minute, full-back Chrissy McKaigue pushing forward to score, with Ciaran McFaul and Emmet Bradley also on target.

James Kielt added another from a free, but Tyrone were soon on top in all the key areas, with their running game and support play exploiting their opponents.

Derry were also struggling to win their own kick-outs, and the home side gratefully snapped up possession, often winning frees that O’Neill despatched.

Sean Cavanagh sliced through the Oak Leaf defence to land a trademark score, and by the 26th minute, they had moved into a 0-07 to 0-04 lead.

Derry went 15 minutes without a score before Ryan Bell converted a free, but they were soon under pressure again, and goalkeeper Eoin McNicholl saved superbly from Barry Tierney, who looked certain to net after Colm Cavanagh had found acres of space to drive through the middle.

McGeary and Richie Donnelly both brought their tallies to two for a 0-10 to 0-06 interval lead.

The younger Donnelly was on fire and thumped over two more brilliant points at the start of the second half.

The introduction of Chrissy Bradley gave Derry more in terms of creativity and finishing, and he hit a couple of points to keep the visitors in contention.

But the game slipped away from Derry in the 50th minute when Tiernan McCann created the opening and slipped the pass for Sean Cavanagh to fire his shot to the top corner of the net.

Conor Meyler and O’Neill added Tyrone points, which were cancelled out by Danny Heavron and Emmet McGuckin. 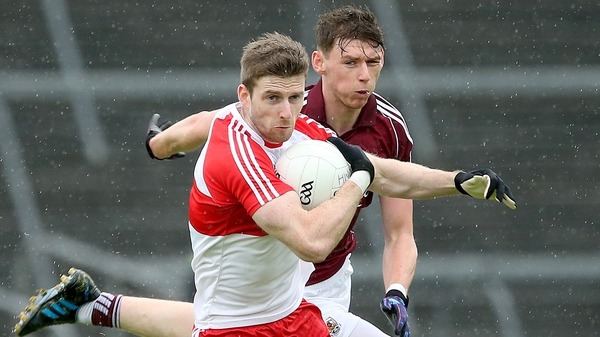