The Oak Leafers had manager Damian Barton serving a touchline suspension and suffered badly in a game they rarely looked like making a contest out of.

By contrast Galway were excellent in this Allianz League Division 2 clash, Johnny Heaney and Eamon Brannigan the stand out performers in an impressive performance from Kevin Walsh's team.

The Tribesmen signalled their intent straight from the throw in as Paul Conroy picked up possession and found Eddie Hoare in a mysterious amount of space from which he sent over the game's opening score with only 12 seconds on the clock.

Derry responded with a lovely Mark Lynch score from out on the right touchline and were in front seconds later when Ryan Bell burst past David Wynne and knocked over the bar when perhaps he could have gone for goal.

Galway looked impressive though and were finding spaces in the Derry half-back line too easily.

A superb Damien Comer point from wide out under the main stand drew the sides level before Galway took controls with five points in succession.

Even a deserved ninth minute black card for corner-back David Wynne who dragged James Kielt to the floor, couldn't upset the visitors momentum.

Conroy, Adrian Varley, Shane Walsh, Liam Silke and Hoare from a free all added scores to make it 0-7 to 0-2 by the quarter-hour mark.

By contrast, Derry were racking up the wides and struggling to make an impact in the Galway half with Walsh's men dominating the middle third of the field.

Ryan Bell was the one Oak Leaf player who looked capable of hurting Galway and he reduced the deficit to five with Derry's first score in 16 minutes but Galway responded immediately with a great run and point from half-back Johnny Heaney.

From there to half-time, it was 'tit-for-tat' Brendan Rogers and Eamon Brannigan swapping scores before late points from Emmett Bradley and Bell again left the home side closer to Galway than they deserved to be at 0-07 to 0-10 at half-time.

Derry made Galway wait out on the pitch before they eventually emerged for the second half but it was the visitors who picked up from where they had left off in the first half, scoring 1-01 inside the opening two minutes.

First Heaney hit a lovely point after a nice Comer pass before Brannigan's pass picked out Varley's who skipped inside and blasted the ball high into the net for double scores at 1-11 to 0-07.

Derry's hopes weren't helped when McFaul received a black card for a needless trip in midfield but Galway's ability to find space was picking holes in a Derry defence that, despite having numbers inside their own 45, were being opened up at will.

Enda Tierney, Heaney, Brannigan and Heaney increased the visitors’ advantage to 1-15 to 0-08 and it could have been worse for Derry had Thomas Mallon not saved low from Silke.

Galway continued to look comfortable despite Derry ringing the changes as the game wore on.

One of those changes, Emmet McGuckin, offered some hope when he appeared to touch home Shane Heavron's high centre but it was too little too late. 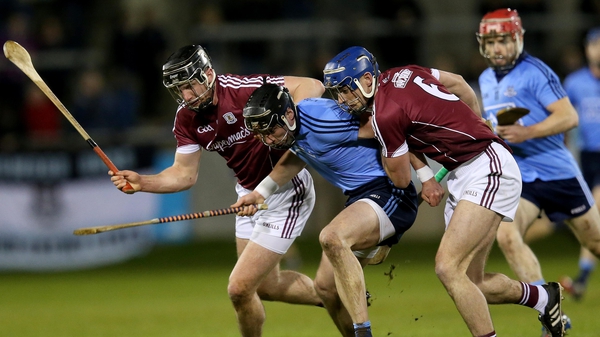 Ger Cunningham's delight at Dublin's upturn after victory over Galway