By Orla Bannon at Breffni Park

Cavan picked up their second Allianz League win in a row after a surprisingly one-sided Division Two victory over Armagh at Kingspan Breffni Park.

After impressing in last week's comeback victory against Meath in Navan, Seanie Johnston was again influential, hitting 1-05 including a sixth minute goal which turned the game Cavan's way.

Gearoid McKiernan also nailed 1-05 on a night of many positives for Terry Hyland's side with David Givney hitting the third goal.

After a bright start hitting the first three points, Armagh faded and struggled to get on top in any sector of the pitch.

Kieran McGeeney's side will surely be much more competitive when they return to the Cavan venue for an Ulster championship showdown on 29 May but are now in relegation trouble after losing a third game out of four in Division Two.

Armagh went 25 minutes without scoring the first half and struggled after the black card dismissal of Ethan Rafferty.

Armagh settled quickly and made a bright start scoring the opening three points, all from play, in the first five minutes through Ciaran O'Hanlon, Stephen Sheridan and Micheal McKenna.

The game turned on a scruffy goal by Johnston in the sixth minute with Cavan's first purposeful attack, Michael Argue's ball in collected by David Givney and he passed to Johnston who bundled it home from close range.

The strike woke Cavan up and they hit the next eight unanswered points, while Armagh failed to score for 25 minutes.

With Cavan first to most breaking ball, the home side continued to capitalise with Jason McLoughlin also scoring a memorable point from an acute angle.

Trailing 1-08 to 0-03, Armagh finally ended their scorign drought with Stefan Campbell nailing the first of his two first-half frees in the 30th minute.

But Cavan finished with a flourish with the last three points of the half to hold a 1-11 to 0-05 interval lead.

Ethan Rafferty, who came on 10 minutes before the break, was Armagh's one ray of hope landing a long-range free followed by a point early in the second half.

However he picked up a very harsh black card for a supposed body check on Johnston and with his dismissal, Armagh's mini fightback was over.

Cavan rattled up 1-03 without reply in a seven minute spell after Rafferty went off, the points coming from David Givney, Gearoid McKiernan and a superb point hooked by Johnston over his left shoulder.

Worse was to follow for Armagh with Givney palming home a second goal following a great run and unselfish pass from Martin Reilly after 52 minutes.

McKiernan drilled home a third, his low left-footed finish in the 59th minute inflicting further punishment on the visitors. 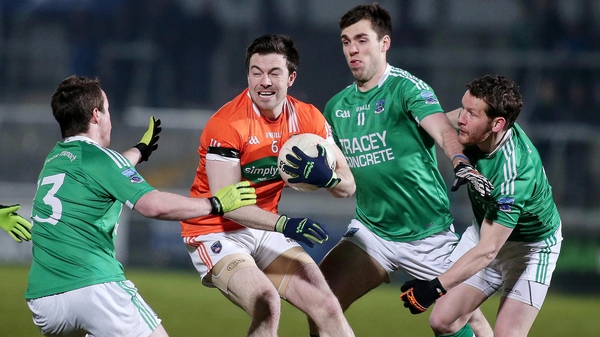