Stephen Rochford bemoaned Mayo's inability to take their chances in his side's Allianz Football League defeat to Dublin in Castlebar on Saturday night.

Mayo trailed by a point - 0-03 to 0-04 - at the interval despite playing against the strong wind but never got closer than within two-points of Dublin in the final 20 minutes of a scrappy 0-09 to 0-07 defeat.

"We battled hard throughout the game," Rochford told RTÉ Sport.

"We did very well in the first half against the breeze and I would have liked us to be able to drive on but Dublin hit three points in the third quarter and, ultimately, that gap left us under pressure.

"We missed a crucial free in the first half and hit the post with another one and when you're coming up against Dublin, the league and All-Ireland champions, missing those opportunities just isn't enough. That was the difference at the end of the game."

Rochford accepted that the performance was a big improvement on their opening-day nine-point defeat to Cork but said that wasn't much consolation in defeat.

"It was but we're not into moral victories. We're not into slapping ourselves on the back when we lose games. We're in it to win them and we didn't do that this evening.

Mayo are missing several established players due to injury and Rochford, in his first season in charge, is looking forward to fielding a more experienced side in round three against the Ulster men.

"It would have been nice to have a bit of further experience maybe to be able to pull off the bench, when the game was in the melting pot in the second half, but that's the nature of contact sport," he said.

"It was attritional out there. We picked up a couple of bangs again out there again but hopefully over the next fortnight we'll be able to pull one or two of the more experienced heads together."

Dublin boss Jim Gavin was understandably happy with his side's efforts, despite them picking up two black cards and one red on the way to victory.

"It was a good result," he said. "To come down to Castlebar, against a Mayo team that would have been disappointed with their performance against Cork but showed good heart tonight, we're happy to come away with two points.

"It was a very physical contest, and the conditions made it difficult, but I thought both sets of players did their best.

"The Dublin boys showed great spirit and resolve. Picking up two black cards and a sending off made our task more challenging but I thought the guys who came in did really well. They showed great composure on the ball and saw the gamne through.

"On balance I think we deserved the two points." 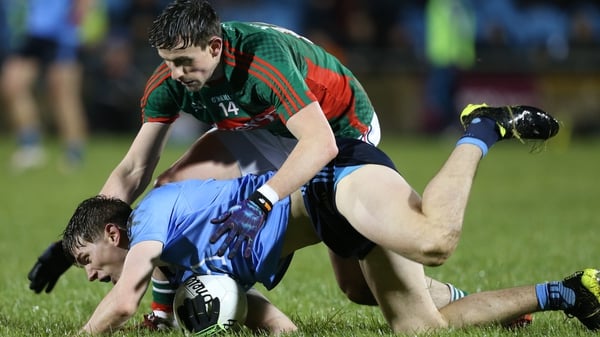