Reigning champions Dublin made it back to back wins at the start of the Allianz League as they dug out a 0-09 to 0-07 victory over Mayo at Elvery’s MacHale Park.

James McCarthy was the star for Dublin and it was his point in the 46thminute that launch a revival for the holders, when they might have been in trouble.

But they led 0-04 to 0-03 at half-time and it was Mayo’s inaccuracies in the second-half, and their lack of quality off the bench that cost them.

Dublin’s Philly McMahon and Johnny Cooper both saw black as tempers frayed and at the end Colm Boyle and John Small were given their marching orders after second yellows, but Dublin held on.

Dublin led by a solitary point at half-time after a closely fought first-half where Mayo crowded their defence and Dublin shot seven wides in front of the 10,520 in attendance.

McMahon’s black card for a trip on Aidan O’Shea happened inside three minutes, and that was a sign of things to come. 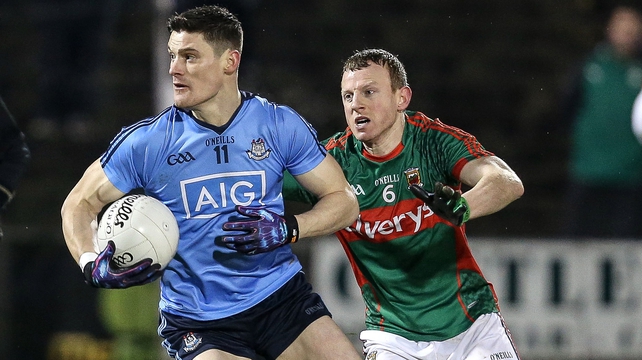 Dublin played with the breeze behind their backs, but didn’t score again until the 20th minute when a trademark Diarmuid Connolly effort from distance hit the post and crept over.

Points were hard to come by, and that was a big score, but straight away Jason Doherty combined with Evan Regan, and the latter levelled things up again.

This game was a repeat of last year’s replayed All-Ireland semi-final, but it had none of the free-flowing football associated with that type of summer football.

Both teams had 15 men behind the ball at times, and it was goalkeeper Robbie Hennelly who came up with the goods to push Mayo 0-03 to 0-02 ahead with a sweetly struck 45 on the angle after 27 minutes.

Denis Bastick provided the reply and just before half-time Rock slotted his second of the game, this time a crucial 45 to give Dublin a 0-04 to 0-03 lead at the break.

Mayo began to pile the pressure on Stephen Cluxton’s kick-out into the wind in the second-half, but Dublin learned to deal with it and eventually found territory again.

The westerners got the first point of the second half, when Diarmuid O’Connor doubled his tally with a smart score from the left, and that tied it up for the fourth time.

But three quick scores, firstly from Rock (two frees), and an inspirational effort from the ever-busy James McCarthy gave Dublin a three-point cushion. 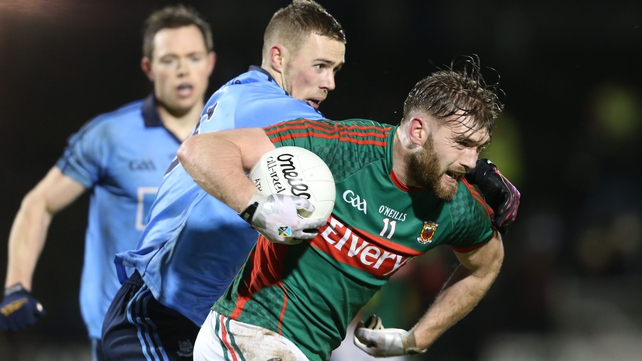 Evan Regan bagged a crucial free, his second score of the game, to give Mayo a reprieve with 26 minutes remaining.

Both teams found it difficult to hold their composure in front of goal but, crucially, Dublin had that bit of extra experience to call on, although it was Cormac Costello and Emmet O Conghaile who made the game safe.

Hennelly and Regan offered the resistance but Mayo didn’t have enough in the end as the late black card for Johnny Cooper and second yellows for Boyle and Small brought the game to a tempestuous finale.