For the second time in his inter-county career, Bryan Sheehan is set to captain the Kerry footballers.

In the Kingdom, the choice of the skipper is decided by the county champions, and 2015 winners South Kerry nominated Sheehan for the role.

However, he then posed the question as to whether the St Mary’s clubman will be guaranteed a starting place on Eamonn Fitzmaurice’s side in the months ahead?

Spillane believes the choice of picking the Green and Gold captain should not the sole preserve of the reigning county champions.

“I think the captain should be chosen by team management and should be a guy that is guaranteed his place and who shows leadership qualities,” he revealed.

“Giving the captaincy to somebody who is not certain of his place puts a lot of pressure on that person.”

If Spillane had his way, then the 30-year-old Sheehan would be in the first team as Kerry bid to bounce back after last year’s All-Ireland final disappointment.

"I would love to see Bryan starting for Kerry. I don't think there is a better kicker of a ball on the ground or off the hand in Gaelic football in Ireland than Bryan Sheehan,” he added.

“I think he is that good. When it comes to skill Bryan Sheehan is as good as anyone.”

Yet the eight-time All-Ireland winner feels that modern science and increased technology can be a negative in assessing a player’s worth.

“The problem sometimes in modern day Gaelic football is that teams are decided not on the basis of skill but on what the stats man says in relation to the tackle count and turners and what the strength and conditioning guys reveal after they’ve looked at the GPS readings.”

Spillane also spoke about the satisfaction in seeing his local club Templenoe make their mark in the All-Ireland junior club championship.

Legendary Spillane brothers from #KerryGAA will get strange looks with their banner at #BirminghamCity game today! pic.twitter.com/JbzKXNPiqn

"We're on a wonderful little journey," he proudly uttered.

In giving the junior grade prominence, Spillane paid tribute to a decision made by former GAA president Seán Kelly.

"When I look back at Seán Kelly as GAA president, people will say that his greatest legacy was getting Rule 42 off the rulebook and opening up Croke Park, Coming from a small club like Templenoe, I think that Seán Kelly's greatest idea was in introducing All-Ireland championships for junior and intermediate clubs.

"It gives such clubs the opportunity after winning their county titles of playing in the provincial championships and then heading to Croke Park for an All-Ireland final."

Indeed, Pat Spillane and other members of the Templenoe travelling contingent were keen to make their presence felt in the English midlands when they paraded their club banner at St Andrews before Birmingham took on Bournemouth in the FA Cup. 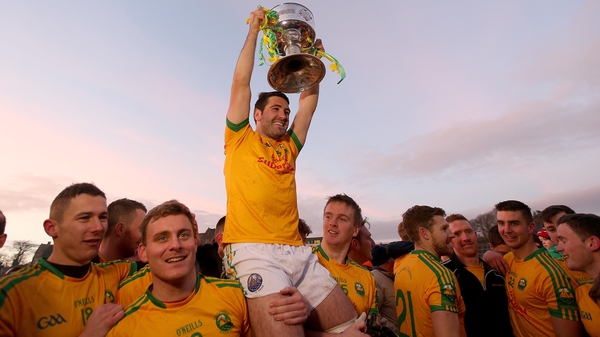