New Mayo manager Stephen Rochford has said he's ready to embrace the massive expectations in the county and will welcome the players' desire for the highest standards possible.

Rochford replaces the joint management team of Pat Holmes and Noel Connelly in the hot seat, both men having relinquished their shared role after the county's players delivered a vote of no confidence.

Mayo were well beaten by eventual champions Dublin in the All-Ireland SFC semi-final replay this year and the well-publicised discontent within the camp eventually led to the departures of Holmes and Connelly.

Rochford insisted he's well prepared for the scrutiny that will come with the position and said he will make no effort to dampen expectations.

“I’m absolutely delighted to be involved with Mayo. They’re one of a handful of counties that will have that level of expectation in 2016 and I’d much rather that than a team that don't have that level of ambition. As a management team were looking to embrace that," he told RTÉ Sport.

“Players now are an ambitious group, they strive for higher standards all the time. It’s unfortunate what happened but we find ourselves where we are and we’ll be looking to drive on and meet the expectations and ambitions of the players.

“My standards would be to go in and deliver the very very highest level for Mayo. My number 1 concern would be to manage the expectations and the ambitions of the players and that their and the management's ambitions match.

"Come championship we’ll be ready for London and if we can gain a bit of momentum God knows where that will take us."

"I and the rest of the guys are very ambitious so we’re not looking to play that down. Mayo have been at the the All-Ireland semi-final and final level consistently over the last five years.

"The aspect is to get another All-Ireland final but we’ll take it one game at a time. Come championship we’ll be ready for London and if we can gain a bit of momentum God knows where that will take us."

Rochford, who guided Galway club side Corofin to a national club title earlier this year, will be backed up by selectors Donie Buckley, Sean Carey and Tony McEntee, and admitted getting the job is the fulfilment of a lifelong ambition.

“It’s been a lifelong ambition from a coaching perspective. It’s probably come a little bit sooner than I would have thought but we find ourselves here now and I’m delighted.

"It’s a case of getting in deep with the players, back into training schedules, and to get them back onto the paddock as soon as possible.

“It’s not ideal – we’re playing on Sunday four weeks but we’ll make the most of it and we’ll be ready for the first round of the FBD on 3 January.

“Today has been a busy day fending media queries, but this part of the role and I'm looking to embrace that, get on with it. It’s a great honour for myself so it’s onwards and upwards hopefully.” 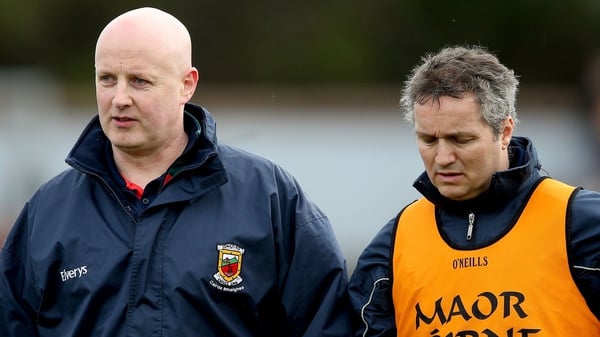 Pat Holmes and Noel Connelly step down as Mayo managers