At the end of a game that had just about everything, Crossmaglen kept their incredible record in finals intact and won an 11th AIB Ulster club title after extra time in the Athletic Grounds.

The 8,694 crowd were treated to a memorable contest which featured four sending-offs, three of which came in extra-time, including both Hughes brothers Kieran and Darren.

The sides were level seven times over the hour's play and Scotstown goalkeeper Rory Beggan missed a chance to snatch victory with an injury-time free at the end of normal time, the sides finishing level at 1-10 apiece.

After playing poorly in the second half and going down to 14 men following Danny O'Callaghan's straight red card five minutes from the end, Cross raised their game in extra-time.

However Kieran Hughes' straight red card five minutes into extra-time, with the sides still level at 1-11 each, was a costly blow for the Monaghan champions.

Cross took over with two Tony Kernan frees putting them 1-13 to 1-11 ahead at the break.

Jamie Clarke, introduced after 40 minutes, became more influential as the game wore on and his vision picked out the unmarked Kyle Carragher for the match-winning goal in the second half of extra time.

There was still time for one more twist, Darren Hughes getting a straight red card and his marker James Morgan also going off for a second yellow.

The sides made little of the stormy conditions to serve up a great contest, with Cross emerging to win their 36th final out of 37 Armagh, Ulster and All-Ireland finals in a golden two decades for the south Armagh giants. 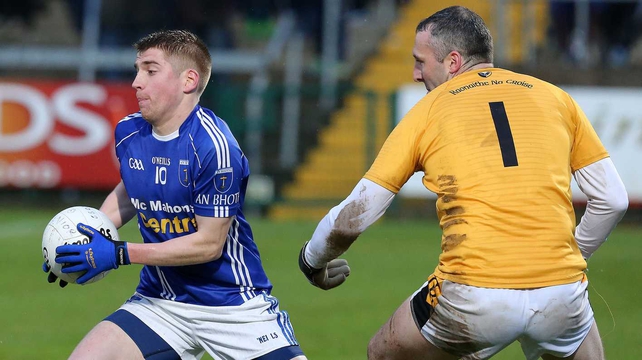 Scotstown, who won the last of their four Ulster club titles in 1989, started brightly with Monaghan goalkeeper Rory Beggan stroking over a '45' in the third minute.

Crossmaglen levelled through Michael McNamee and within a minute, Stephen Kernan pointed from a difficult angle to put the favourites ahead.

Darren Hughes and James Morgan were locked in combat in the fiercest tussle of the afternoon and Hughes came out on top in the ninth minute to net his fourth goal in three Ulster club championship games.

Donal Morgan's long ball in was misjudged by Morgan, who allowed it to bounce over his head, and Hughes grabbed possession and stuck the ball into the net giving Paul Hearty no chance.

Despite difficult conditions and a tricky wind, there was a great energy and tempo to the game and Orin Heaphy pointed to put the Monaghan champions 1-2 to 0-2 ahead after 15 minutes.

Crossmaglen responded well and were level by the 22nd minute with Johnny Murtagh scoring twice from play either side of Kyle Carragher's fisted point.

Shane Carey's free briefly put Scotstown back in front before Tony Kernan pounced just before half time with 1-1.

Kernan then tagged on a free to put the six-time All-Ireland champions 1-6 to 1-3 ahead at the interval.

The loss of midfielder Johnny Hanratty to injury at the break was a huge blow to Cross and Paul Hearty's kickouts suffered as a result.

Scotstown were the better side in the second half with James Turley and Shane Carey influential, the latter kicking 0-4 after the break, three from frees.

A Carey brace and Donal Morgan's point brought Scotstown to within a point, trailing 1-7 to 1-6, early in the second half at which stage Crossmaglen introduced Jamie Clarke. 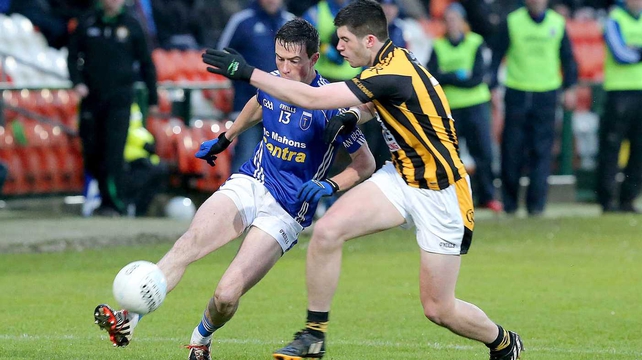 Johnny Murtagh's shot was pushed over the crossbar but Scotstown refused to go quietly and drew level with points from Emmet Caulfield and Conor McCarthy.

It was obvious the last 10 minutes would be tense and tight.

Substitute Danny O'Callaghan almost blew it for Cross when he received a straight red card for striking Turley off-the-ball in the 55th minute – just four minutes after coming on.

Tony Kernan twice nudged Cross ahead with free-kicks in the closing stages, but twice Scotstown drew level through Carey frees.

Rory Beggan had a long-range free to snatch it for Scotstown deep into stoppage time but it dropped short and Stephen Kernan bravely cleared the danger to leave the sides level at 1-10 apiece at the end of the hour's play.

Shane Carey's free at the start of extra time put Scotstown ahead for the first time since the 19th minute.

But Cross, back up to fifteen players for extra time, took over with three unanswered points from Callum Cumiskey and Tony Kernan's two frees to lead 1-13 to 1-11 at half time in extra-time.

Kieran Hughes received a straight red card five minutes into extra time when the sides were level at 1-11 apiece, and with it, Scotstown's challenge faded.

Jamie Clarke came more into the game, winning a vital free which Kernan converted and when Rory Beggan hit a bad kickout in the second half of extra-time, Clarke spotted Kyle Carragher who fisted the ball into an empty net.

Brian McGinnity pulled a goal back for Scotstown but Cross were an unstoppable force by then with David McKenna and Padraig Stuttard pointing to steer them to another victory. 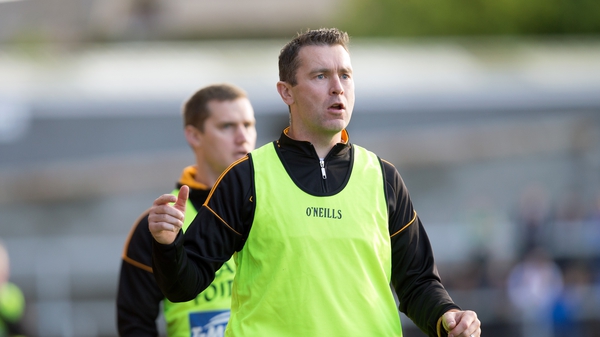